Top 25 Notebook: No.12 Miami take down No. 3 Virginia in close ACC contest 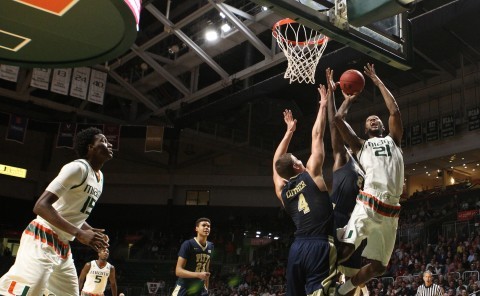 The Hurricanes did just that, as they used their explosive offense in the first half to pick up their sixth win in seven games, beating the Cavaliers 64-61 at home, – Virginia’s first loss to a ranked opponent – and in the process took sole possession of second place in the ACC.

While the Cavaliers found themselves trailing at halftime, they clawed their way back into the game and with nine minutes, 38 seconds remaining, the Cavaliers took regained a lead on a Mike Tobey layup, for the first time since the 5:20 mark of the first half.

What looked like a possible comeback ultimately fell short, however, as Miami’s defense found a way to lock down in the final minutes. Virginia’s Malcolm Brogdon, who shined Monday night with a team-high 28 points, couldn’t find enough support from his teammates to avoid the upset.

In what was close to a must-win game in order to maintain sole possession of second place in the Big 12 after two straight losses, West Virginia produced its best offensive performance in conference play.

Paige went 12-of-21 from the field and a perfect 9-for-9 from the line, while teammate Tarik Phillip made six 3-pointers and finished the game with 22 points of his own. Devin Williams’ addition of 13 points and nine rebounds showed the dangerous offensive balance the Mountaineers have when they spread the ball.

While the West Virginia led at halftime by 49-41 at halftime, the Cyclones showed resiliency by challenging the Mountaineers in the second half, which resulted in a total of 12 lead changes throughout the game.

In the end, however, West Virginia wore down Iowa State with its bench play and ran away with a decisive 10-point win.

No. 25 Texas stays afloat with win over Kansas State

It was junior guard Isaiah Taylor who led the Longhorns Monday in their bounce-back win after a tough loss to Baylor just two days prior. Scoring 19 points, including a clutch 3-pointer to seal the win with 43 remaining.

Javan Felix scored 13 points and Eric Davis Jr. had 10 for Texas to back up Taylor’s play. These three players plus senior forward Connor Lammert, who tallied eight points and seven rebounds, kept the second half rush by the Wildcats in check. While Kansas State eventually caught up to Texas, trailing by one in the final minute of regulation, Dean Wade missed a 3-pointer with three seconds remaining to secure the win for the Longhorns.

Leo Stern can be reached at [email protected]