UMass baseball is almost here, but spring weather is not 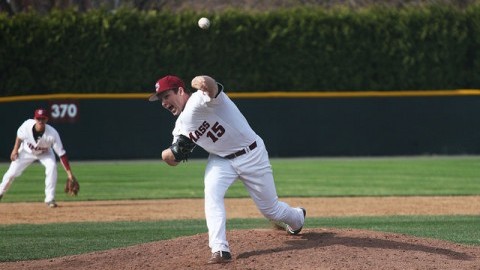 Spring sports are underway in Amherst although the weather outside gives no indication. The spring equinox is still a few weeks away – with the season officially kicking off Sunday, Mar. 20. But multiple “spring” sports have already begun their seasons, and the Massachusetts baseball team is no exception.

By Mar. 20, UMass will have already played 11 games before its home opener against Holy Cross on Mar. 23 right before Atlantic 10 play begins. The Minutemen will travel to Charleston, South Carolina to begin the 2016 season next weekend, participating in a three-game series with Charleston Southern before they head even further toward the equator for an eight-game stretch in Florida – with contests against Army, Harvard, Maine and Lehigh.

It’s easy to say the Minutemen are at a bit of a disadvantage, as they’ll play close to 25 percent of their season before hosting their first home game. But coach Mike Stone is not ready to make excuses about the schedule.

“It’s always been that way,” Stone said. “We really don’t know any different, but it would be nice to play at home, yes. Obviously it’s more difficult to play on the road than at home, but there’s no option for that. We don’t have a turf field and the weather really doesn’t break (in New England) until after April 1.
“Consistently, year in and year out, that’s what the situation brings us,” Stone said. “It comes with the territory. We don’t make a big deal out of it. It’s just the way it is.”

UMass finished with a 16-27 record in 2015, finishing 1-8 at neutral sites and 8-13 on the road. The Minutemen’s only winning record last season came at their home at Lorden Field – winning seven of 13 contests in Amherst.

“It just is what it is,” Stone reiterated. “It’s not really anything that we want to use as an excuse or a negative. We just have to adapt.”

This is not an isolated issue for UMass alone. Unlike professional baseball, where northern teams will head down to Florida or Arizona for several months before the season, college teams are bound to the limitations their schools bring.

Most other collegiate teams that play in the northeast are forced to take their play south for the beginning of the season, with most practices being held indoors due to winter weather in New England. The Minutemen hold most of their indoor practices in Boyden Gym in preparation for 2016.

“We have a nice space in Boyden,” Stone said. “We have four batting tunnels and we have an open space that’s pretty good. Occasionally we get out on the lacrosse field (Garber Field) to get some fly balls and some relays and some cuts – that sort of thing. We also go to Amherst College and scrimmage on occasion… There’s opportunities to get some more live simulated live looks, different than Boyden.”

Kyle DaLuz can be reached at [email protected]