UMass baseball ready to improve on .500 finish in A-10 play with balance of returning veterans and young talent 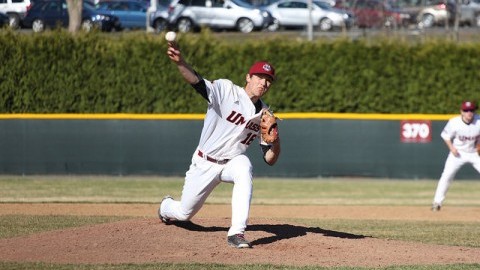 Having to deal with temperatures in the single digits with wind chills making it feel like the negatives this past weekend is no welcome sight for the Massachusetts baseball team as it gears up for its home opener in just five weeks.

The Minutemen will heed no warnings of mother nature and will head into 2016 hoping to build on the progress and a .500 record in Atlantic 10 play during the 2015 season.

Senior captains Ben Panunzio and John Jennings will lead UMass for the upcoming season. Panunzio, who led the Minutemen with a 1.64 ERA last season in 22 innings on the mound, was named the most improved player of 2015 by UMass coach Mike Stone. The 6-foot-2 right-hander pitched his best game in the biggest spot last season – tossing four scoreless innings of relief, striking out six in the Beanpot Championship, which the Minutemen lost 2-0 to Boston College.

Jennings, who will split time behind the plate and at first base as he has since his sophomore season, played in just 18 games in 2015 due to injury. Jennings was named the most improved player of the 2014 campaign, when he posted a .264 average with nine doubles and 11 RBIs.

“They emerged in the fall as good, positive leaders,” Stone said, speaking of Panunzio and Jennings. “They’ve taken on that role of extra leadership and have done a great job. They do things the right way. They embrace the new responsibilities, and we feel like good things will happen with the ball club.”

The Minutemen finished at an even 12-12 in A-10 play last season, failing to win series against Virginia Commonwealth, George Washington and Rhode Island and Saint Louis. They closed out the season winning two out of three at George Mason but were eliminated from conference tournament contention.

Saint Joseph’s, La Salle, Fordham and George Mason will be the four A-10 opponents making stops in Amherst for conference play, while UMass will travel to take on Davidson, St. Bonaventure, Richmond and URI. The Minutemen will host Boston College Mar. 30 for a non-conference game, just before they take on the Eagles in Amherst for the first round of the Beanpot Championship April 6.

“Every weekend you’re playing a good ball club; all the teams are strong,” Stone said about the A-10 schedule. “There are no teams to take advantage of. You have to have good starting pitching and relief and a strong back end to close it out.

UMass is tied for 11th with Dayton in the most recent A-10 preseason poll, with Saint Louis, VCU and URI rounding out the top three.

“Those are really based off where you finish last season,” Stone said of the preseason poll. “It’s one of those things you have to fill out before the season – it doesn’t mean much. It’s more about getting off to a good start.”

The Minutemen will replace the offensive production of recent graduate and 2015 most valuable player Kyle Adie. The former UMass centerfielder hit a team-high .322, with eight doubles, 55 hits and a slugging percentage of .421. The Minutemen will be missing the firepower of Adie’s classmates Rob McLam (.294, six doubles, 16 RBIs) and Adam Picard (.253, four home runs, 26 RBIs).

“This team provides maybe a different approach,” Stone said. “The guys have done a great job of working hard and improving. I think we’re better overall (than last season’s unit). We’re more team-oriented throughout, and have people who will contribute in a lot of ways.

Aside from the two captains, the key contributors figure to be remaining starters Mike Geannelis (pitcher/first baseman), Ryan Moloney (pitcher), Dylan Morris (outfielder) and Vinny Scifo (shortstop). Morris spent some of his summer as a member of the Falmouth Commodores of the Cape Cod Baseball League.

The Minutemen will have 11 freshmen joining the Minutemen this upcoming season – four apiece from Massachusetts and Connecticut, with two from New Hampshire and a lone New Jersey native.