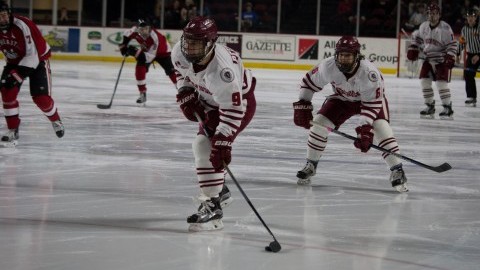 The No. 11 River Hawks (20-7-5, 11-5-4 Hockey East) carried play throughout the evening and beat the Minutemen (8-20-4, 2-15-4 HEA) in their typical, balanced fashion. Four different players scored goals for UML and nine players recorded points overall as the River Hawks completed a season sweep of UMass, going 3-0 against their system rivals.

Junior Alex Wakaluk made important saves for the Minutemen in the first period to keep the game scoreless heading into the first intermission, but the River Hawks started cashing in on their chances in the second period.

A two-on-one chance developed early in the period as C.J. Smith converted and scored his 14th goal of the season to open the scoring at two minutes, 29 seconds of the second. The goal kick-started play offensively for UML, which went on to score two more times in the period.

“That puts us in a bad spot on the road early in the second period,” Minutemen coach John Micheletto said after the game.

Ryan Collins doubled the lead minutes later, and the Minutemen trailed 2-0 just over five minutes into the period. A shorthanded goal from John Edwardh late in the second made it a three-goal game and concluded a dominant period by the River Hawks.

“(In the second period), we did not get pucks out when it was critical to,” Micheletto said bluntly.

After another UML struck early in the third made it a 4-0 game, UMass finally began to put together some effective offense. Walsh’s 17th goal of the season came on the power play at 12:10 of the third, and five minutes later Chukarov scored his third of the year to cut the deficit to 4-2.

But it was too little, too late from the Minutemen and the 4-2 score would hold up as the final of the game.

After the game, Micheletto said things got away from the team in the second period, and noted that although play improved in the third, you don’t win many games without putting together a 60-minute effort.

One bright spot for the team was the performance of Wakaluk, who made 38 saves on the night and kept the game competitive during a second period that UML dominated.

“In the second period, it was all because of him,” Micheletto said. “He had himself a good night, but it’s too bad we couldn’t put together 60 minutes in front of him.”

It was the second consecutive 4-2 defeat for the Minutemen, who lost to Northeastern by an identical score last Saturday as the Huskies completed a two-game sweep.

It was a rare non-conference meeting between Hockey East foes, and it continued a streak of seasons in which the Minutemen and River Hawks have played a bonus non-conference game.

UMass will return to action next Friday night against No. 5 Providence for the first game of a home-and-home series between the teams. It will be the last game of the season for the Minutemen at Mullins Center, and it will be Senior Night for two players set to graduate – Walsh and Ben Gallacher.