UMass hockey falls to No. 5 Providence 4-1 on Senior Night 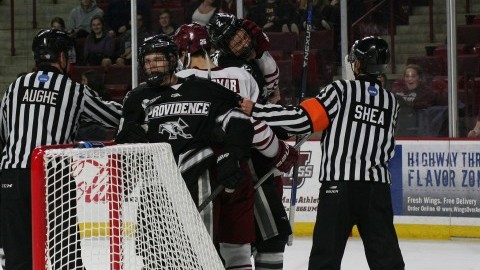 On a night when Massachusetts hockey players Shane Walsh and Shane Walsh were being honored for Senior Night, it was a trio of No. 5 Providence seniors that caused the most damage, with the Minutemen falling to the Friars 4-1  Friday night at Mullins Center.

It was the Friars’ special teams that had the most success on the night, scoring both on the power play and while on the penalty kill. Saracino opened the scoring six minutes, 10 seconds into the second frame on the man advantage, putting home a loose puck past Minutemen goalie Alex Wakaluk (31 saves). Just 2:17 later, the Friars doubled their lead on a shorthanded tally from Mingoia despite going down a man after Tanev was sent to the box for interference.

UMass coach John Micheletto liked what he saw from his team, regardless of the end result.

“I really liked our five-on-five play, we got pucks in, had a little speed on the cycle and a lot of low offensive zone possession,” he said. “We created a couple of seam passes, I’d like to see (Walsh’s) on video again on the offside call. Obviously the couple of great looks we had early on the powerplay would’ve been nice to get on the board early. And then in the middle 20 we give up the PK and then while we’re on the power play we give up another one.”

Micheletto added that while it may not have been in the game plan, he praised the way the team still fought despite falling behind to a team like Providence.

“I thought it was a real good response by us to continue to push and come out with a lot of energy in the third and to just come up a little bit short,” he said. “In terms of our effort and sticking to the game plan and taking advantage of what our strengths are, I’d like to have this same performance tomorrow at Schneider (Arena) and see how the cards fall there.”

Friars coach Nate Leaman acknowledged their performance after the Minutemen had cut the deficit to two.

“I thought we played our best hockey after they made it 3-1,” Leaman said. “I thought we were cheating all night offensively, and we had a lot of turnovers in the game. I think we have to be a lot better in those two areas tomorrow night, it’s not a team we wanna trade chances with.”

While praising the efforts of Mingoia, Leaman also recognized the performances of two others.

“I thought (Mingoia) really got going after he scored, I thought Kevin Rooney was our best forward,” Leaman said. “I thought Kevin played a terrific game, he gave us good energy all night and his skating ability really showed up on the big sheet. I thought (defensemen) Tom Parisi played a pretty good game too.”

Entering the third period, Tanev wristed one past Wakaluk, to make it 3-0, but was answered by Dennis Kravchenko’s 11th goal of the season courtesy of the power play after tipping home a Walsh slap shot form the point.

Although UMass went 1-for-5 while a man-up, Micheletto didn’t think his team was short of chances, crediting the Providence for is ability on the penalty kill.

“We had a couple of good looks, broke them down, had a backdoor 2-on-1 then a pot play off an overload. Obviously Kurt (Keats) and Ray (Pigozzi) in the second, the kid made a great save on,” Micheletto said.

“Their kill numbers this year and their defensive numbers in general are very good, so we knew it was gonna be tight going. As I mentioned, I would’ve liked for one of those three that I referenced in particular and all of a sudden we’re looking at 40 percent as opposed to 20 percent. Twenty percent against that team is still above the average.”

The Minutemen will be back in action Saturday night at 7 p.m. for their final game of the regular season against the Friars.