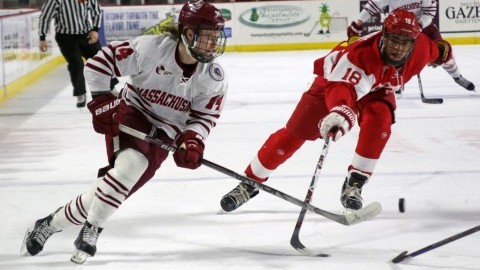 Friday night’s matchup between the Massachusetts hockey team and No. 9 Boston University was a close one for 57 seconds.

But four minutes, 49 seconds after puck drop, it wasn’t.

BU freshman Jordan Greenway opened the scoring three seconds before the first minute had gone, with Chase Phelps and Mike Moran extending the lead to 3-0 by the 15:11 mark.

UMass coach John Micheletto acknowledged that a better effort was needed to not let it get to 3-0 4:49 into the contest.

“Early goals are tough to come back from,” he said. “Fifty seconds plus we get a wide shot and we’re not in a position to defend and three quarters of our guys never having gotten a shift is a difficult thing to come back from.”

It seemed like the Minutemen were gaining some momentum after Ray Pigozzi cut the lead to 3-1 with a little under 13 minutes to go in the opening period, but the Terriers had other ideas.

With 53 seconds remaining in the frame, Oskar Andrén found the back of the net for BU to regain the three-goal advantage and a 4-1 lead heading into the first intermission.

“It’s managing your emotion, we got to push back and if you don’t do it quickly enough, you put yourself further and further in a hole,” Micheletto said regarding the Terriers’ fourth goal.

“One shift becomes two, and two becomes five,” he said. “We did a better job after the fourth goal from (Andren) of coming back and trying to impose our will and getting the better of the shots and inside puck touches.”

In its past four games against UMass, BU has obliterated the Minutemen defense, scoring a combined 30 goals.

Senior defenseman Ben Gallacher talked about limiting the details when asked about the Terriers’ recent success against UMass.

“It’s really small stuff that makes a huge difference in games,” Gallacher said. “It’s the difference between getting the puck all the way in the zone at center ice and all the way out of our zone. I think we can do a lot better job with that moving forward.”

BU coach David Quinn was happy with the way his team started to get a “good two points.”

“Obviously we came out with a lot of energy, were opportunistic, possessed the puck a lot I thought we moved it well,” Quinn said. “I thought we tailed off a little bit as the game went on and lost a little bit of focus, but attribute some of that to the way UMass played, they never quit and kept coming at us.”

In the midst of a nine-game losing stretch, the Minutemen will have a quick turnaround and a chance to get back in the win column when they take on American International College Tuesday in Springfield.

“We were just talking about it in the locker room, you got to have a short memory,” Gallacher said. “We got another chance Tuesday night against AIC to turn this whole thing around for us and get moving back in the right direction.”