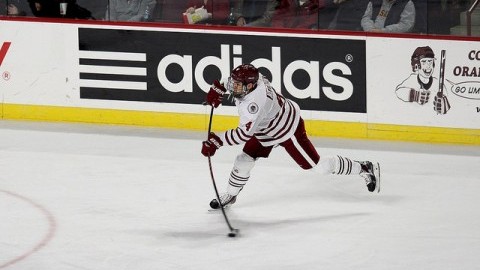 The junior wasn’t sure what he had stumbled upon, as nothing looked familiar to him besides the River Hawks’ jerseys, so he went online in hopes of getting more details.

“I do remember it was on NESN and it was kind of funny because you didn’t really know about it and you were watching these games and you didn’t recognize the arena or anything like that, so once I was watching the game I looked it up and what was going on so it did look pretty cool,” Hetnik said.

At the time, Hetnik was unaware he would eventually be a part of what he was watching on his television.

The Minutemen announced Monday they would be participating in the 2016 Friendship Four tournament next season on Nov. 25 and 26 in Belfast, Northern Ireland.

“I think I was home doing work and coach (Micheletto) sent us an email about the press release and I was just thrown back by it, I didn’t really see what the details were,” Hetnik said.

“So I opened it up and I was pretty amazed about the opportunity that we’re going to have next year and I’m really excited about it, so I can’t wait.”

UMass will be one of four teams to partake in the event, joining conference rival Vermont and ECAC members No. 1 Quinnipiac and Saint Lawrence.

The Minutemen will face the Catamounts in a game that will count as a conference matchup, with the winner facing either the Bobcats or Saints for the Belpot Trophy and the loser playing in a consolation match.

Micheletto talked about when the team was contacted about it, noting he had many inquiries about this tournament.

“When we were first approached, it was in some exploratory stages. Obviously we were excited that there was a possibility, we had a thousand questions about it, mostly because there’s nothing else like this event in college hockey,” Micheletto said.

“As many tournaments as there are, there’s nothing with the international flavor. There’s nothing at all with the close relationships to the community that’s hosting it or the number of events that the players who are involved in the tournament participate in in the week leading up to the actual competition.”

He later added that the more information they received, the more the excitement grew, especially being able to represent the Commonwealth and Hockey East.

Freshman Callum Fryer, who was born in England but moved to Canada when he was two, said he was in his dorm when he had received the news.

“I saw a tweet about it and I was just ecstatic when I saw it and really pumped up that we’re going to Northern Ireland next year,” Fryer said.

“Obviously going back near home feels really nice,” Fryer added, noting that he returns home every few years. “I might have a couple family members that actually might come watch the game, so it should be fun going there.”

The games will be held at SSE Arena, which is the home arena for the Belfast Giants of the Elite Ice Hockey league.

Fryer recognized the neutral site as one of several things to look forward to.

“It’s just really exciting,” he said. “We get to play really good teams in a different area where there’s no home-ice advantage, so the different atmosphere will definitely be a cool experience.”

For junior defenseman Brennan Baxandall, he was aware of this tournament as one of his friends plays for Colgate, which competed in the event this year.

“I saw some pictures from him through Facebook and Instagram,” Baxandall said. “I was a little bit jealous that he got to go but obviously now we do, so we’re really excited.”

The jealousy has disappeared, with Baxandall calling it “an incredible opportunity.”

“It’s going to be a great experience,” he said. “Obviously it’s during Thanksgiving weekend when all of the students get to go home and we don’t and now that we get to go on a trip it’s super exciting, especially to get a taste of their culture and kind of see Northern Ireland and also to play two crucial games as a part of the regular season.”

Hetnik said he never imagined he’d be going to this part of the world so early in his life, but that it’s just the distinctiveness of the sport.

“(Hockey) is a very unique sport where you can travel to a lot of interesting places and see the world and have a great time doing it while playing hockey,” he said. “It’s a great boost for everyone as it’s something to look forward to and something to really remember for the rest of our lives.”