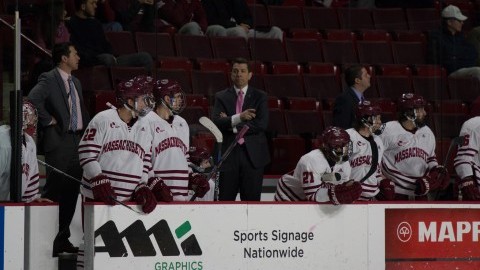 There was a brief ray of sunshine for the Massachusetts hockey team when Maddison Smiley tied the game at two against Northeastern Saturday night at Matthews Arena.

But eight minutes after Smiley had found the back of the net, that ray of sunshine disappeared.

A power play goal from NU’s Nolan Stevens with 6:12 remaining in the second period regained the lead for the Huskies, and another tally on the man-advantage by Zach Aston-Reese just 3:03 into the final period gave NU the 4-2 victory over UMass.

Minutemen coach John Micheletto, who was given a game misconduct and ejected from the game for arguing with the officials, was pleased with the work his team put in despite the loss.

“(I) loved their effort, guys battled their rear ends off, had the better of the play, deserved a better outcome and didn’t get it,” he said. “We understand that that’s the way the games are going at us and the way things are being called against us.

“Give us a lot of credit for being resilient and battling through and giving ourselves an opportunity to win the game.”

One night after being run out of the Mullins Center, Micheletto decided to shake up every line, including putting goaltender Alex Wakaluk back between the pipes over Nic Renyard.

With these changes, he hoped there would be more energy than the previous night.

“Just trying to find combinations that get us out of the funk,” Micheletto said, referring to the adjustments. “Obviously last night was not a typical what I felt to be energy from us. The line changes were an attempt to find some combinations that reach into our energy and whether that was directly related to our performance tonight or not, I don’t know.”

A pivotal aspect of the game occurred via special teams, with UMass allowing three power play goals to the Huskies while it was unable to find the back of the net on six man-advantage opportunities.

The Minutemen accumulated 30 penalty minutes, which Micheletto voiced his displeasure at.

“You’re gonna have to ask somebody from the league office to comment on that one,” he said. “It seems excessive to me, but that would be up to individual interpretation at this point.”

He also felt that despite not scoring while up a man, the chances for his team were there.

The only problem was the execution was not.

“There were a handful of situations where we had pucks on our sticks and they just made a great save or we just couldn’t quite bang it home into an open net,” Micheletto said. “I think we certainly generated enough looks, I would’ve liked for us to generate a few more shots on that last power play opportunity we had, but having said that I thought we got enough looks to bang one home.

He added: “I know the number on the score sheet doesn’t look good, but I think that only tells part of the story. We had an errant deflection off of one of our own penalty killers’ stick on a PK and they get a 5-on-3, which you never see, two penalties on the same play. “

UMass will be back in action next weekend when it takes on UMass-Lowell in a nonconference matchup.