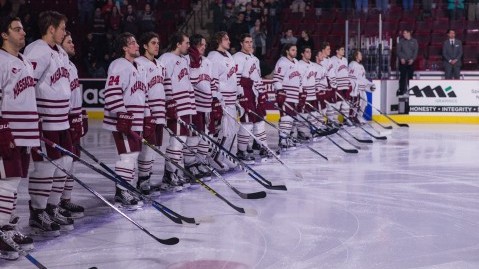 The Massachusetts hockey team will be heading overseas next season.

The Minutemen will be a part of the 2016 Friendship Four tournament in Belfast, Northern Ireland, which also includes Vermont, Saint Lawrence and No. 1 Quinnipiac, according to UMass athletics. It was first announced Monday morning by Boston mayor Marty Walsh and Belfast Lord Mayor Arder Carson.

The tournament is set for Nov. 25 and 26 at SSE Arena, which is where the Belfast Giants of the Elite Hockey League play.

“We are thankful to be invited to the Friendship Four event,” UMass athletic director Ryan Bamford said in the press release. “This will be a special international trip for our program and will enhance the experience for our student-athletes.”

In the Nov. 25 tournament opener, the Minutemen will face off against fellow Hockey East opponent Vermont, followed by a game against either the Bobcats or Saints the next day in either a championship game for the Belpot Trophy or a consolation matchup.

“UMass hockey is excited to represent the Commonwealth next November in the second Friendship Four in Northern Ireland,” UMass coach John Micheletto said in the release. “The organizers put together a first-rate event in 2015. We look forward to another fantastic weeklong cultural experience as well as outstanding competition. I am certain it will be a trip that our players will grow from and remember fondly.”

In this year’s first annual Friendship Four tournament, UMass-Lowell came out of Belfast as champions in a field that also included Northeastern, Colgate and Brown.