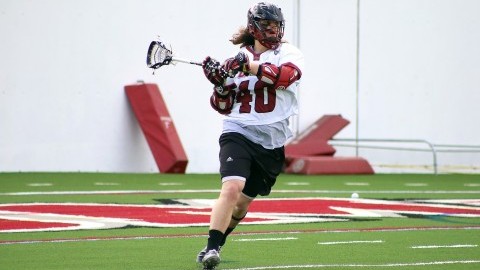 For the second straight year, the Massachusetts men’s lacrosse team lost its season opener to Army, this time by the score of 9-5.

Freshman Ben Spencer recorded his first two goals as a Minuteman (0-1) and sophomore goalkeeper Dan Dolan made nine saves in his first collegiate appearance, but it was not enough as the Black Knights (1-0) pulled away with a four-goal fourth quarter.

UMass coach Greg Cannella thought his team played with a lot of energy early on and played solid defensively, but the lack of offense and struggles with faceoffs came back to haunt them.

The Minutemen won only 5-of-18 faceoffs, three of which were won by Charlie Schatz, while they and could only muster 16 shots, forcing Army goalkeeper AJ Barretto to make just three saves.

“We struggled at the X, they have a very strong faceoff guy, (Dan) Grabher, from last year and coming into this year we knew that would be a struggle for us,” Cannella said. “We just didn’t have enough scoring punch, it’s kind of been who we’ve been in the preseason. You can’t score five goals and expect to win lacrosse games, you just can’t do it.”

After falling behind 5-2 in the beginning of the second half, UMass stormed back scoring three unanswered goals to knot the game at five shortly after the final quarter began.

Gianni Bianchin cut the lead to two with a man-up goal at the 8:33 mark of the third quarter, with Spencer adding his second of the day two minutes later with junior Grant Consoletti completing the comeback 56 seconds into the fourth quarter.

Sophomore Jake Lisauska tallied the Minutemen’s other goal, the first of collegiate career.

Cannella said it was a positive sign to see his team fight its way back into the game, especially considering what happened the last time these two teams met.

“Army last year was up 11-3 on us on the road at our place, so for our defense and team to come together and encourage each other and make a couple plays during that stretch to get us back to 5-5, yeah that’s an encouraging sign,” he said. “You have to take the step though, you can’t foul after that, you gotta score the next goal if you wanna win the game, especially on the road.”

The Black Knights finished with 43 shots on the day, though Cannella attributed this number to not just the style that Army plays, but also the amount of man-up opportunities it received.

UMass committed seven fouls throughout the contest, but their man-down unit  kept Army in check, allowing just one goal.

Despite this, Cannella still lamented the Minutemen’s lack of discipline.

“Obviously they played well, but you can’t foul seven times and expect to win games,” he said. “They work hard with the ball and work hard off the ball and do a nice job of getting those opportunities.”

Coming into the season, it was unclear which goalie would get the majority of playing time. Although D.J. Smith got the start in net, it was Dolan who manned the cage in the second half, making several key saves to keep the Minutemen alive.

“I thought both guys were very good in the goal,” Cannella said. “(Smith) and (Dolan) both were solid and consistent throughout the fall and into the spring so that’s what I’ve kinda been hoping for.”

UMass will be back in actions next Saturday for its home opener at Garber Field against No. 12 Ohio State.