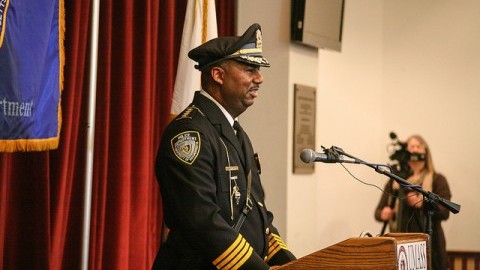 Tyrone A. Parham was sworn in as UMPD Police Chief on Friday. (Shannon Broderick/Daily Collegian)

University of Massachusetts Police Chief Tyrone Parham, who began his role Jan. 11 and was officially sworn in Friday, said that he looks forward to seeing how the University’s plans for this year’s “Blarney Blowout” pan out.

Meeting with the media Friday morning for the first time since beginning his role, Parham said he’s studied recent history of the event and is optimistic heading into this year.

Six people were arrested and no serious injury or property damage was reported after last year’s Blarney, which is day-long pre-St. Patrick’s Day occasion that is annually held the first weekend of March. It was a stark contrast to the 2014 Blarney Blowout, when 55 people were arrested as police in riot gear dispersed thousands from an outdoor party in North Amherst.

The University implemented several measures in 2015 – such as an updated guest policy, a campus concert and parking restrictions – that stemmed from a commissioned report on crowd-related disturbances from former Boston Police Chief Ed Davis in the aftermath of 2014.

Parham cited the guest policy revision, among other plans, as a reason for this year’s anticipated success.

UMass spokesperson Ed Blaguszewski said that while plans are still being discussed, the hope is to have “much of what we had going on last year,” including a concert.

No date has been confirmed but a UMass men’s basketball game against La Salle at the Mullins Center has been pushed back from 3 to 8 p.m. March 5.

Since joining the UMass administration, Parham says he’s been involved in many of the planning meetings regarding Blarney. He also mentioned that reading much of the feedback and reports from the last two years, calling himself a “history/context kind of guy.”

“I want to know how we got here, how we got to the way we do the things we do,” he explained.

While he acknowledged that the 2014 celebration was a challenge for the University, he called what he’s observed of 2015 as a “huge shift.”

Drawing from more than 20 years of his experience in police work at Penn State University, he added that he saw a lot of similarities between what went well there in terms of mass celebration and what works well at UMass. He cited restrictive guest policies, landlord involvement, and local business cooperation as examples.

However, he mentioned that there were some key differences.

“I’ve never seen hundreds of people gathered in one place outside. That poses new challenges. In Pennsylvania, the parties are generally focused inside private homes and apartments,” Parham said.

He also mentioned the different impact Greek life has on the UMass campus.

According to Parham, “It’s definitely not as prevalent but they are still involved. I know this year fraternities are working to make it a positive experience for everyone.”

In a letter to the editor last week, Mike Schmidt, vice president of community relations for the UMass Interfraternity Council, said “UMass Greeks … agreed to take a stand with the Amherst Police Department in taking a non-active role during the festivities of March 5 (commonly referred to as the Blarney Blowout). We recognize the harmful consequences that day can have on both the town and the school’s reputation, and will do our best to minimize any problems that may arise that day. Luckily, we have a clean-up scheduled the day after on March 6, so we can remove any mess that is created.”

The event, which will be hosted Feb. 27, is meant to “strengthen UMass Greek Life with our community leaders who work tirelessly to ensure the safety of Hampshire County.”

Parham felt it important to note that the University’s biggest challenge in addressing Blarney is not members of the UMass community. Instead he identified the massive influx of guests from outside the University as a problem.

In order to combat this, he wants to encourage UMass students to be clear about the school’s social norms and what is and isn’t acceptable behavior.

“You know, I’ve talked to a lot of students on campus and this is not an event that students are proud of. They want to this to be a success,” he said. “The people here are committed to this being successful.”