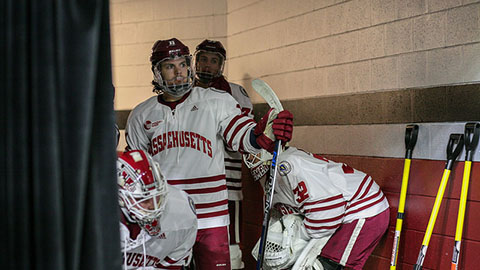 Tuesday night’s matchup versus American International College presents the Massachusetts hockey team with the chance to record its first victory since Jan. 2, and the opportunity to head into its weekend series with Northeastern with some much-needed confidence.

The Minutemen (7-17-4, 2-12-4, Hockey East) will go up against a Yellow Jackets team that has had similar struggles this season, entering this contest with a 5-22-2 overall record and an 11-game winless streak.

Recently, UMass has seen its offensive production increase, scoring a combined 13 goals in its last four games. Prior to this stretch, the Minutemen could only muster three goals in defeats to No. 7 Boston University, No. 3 Boston College and No. 11 UMass-Lowell.

This should bode well for UMass, as it will go up against an AIC squad that is giving up an average of 4.1 goals and 38.1 shots against per game.

Minutemen coach John Micheletto touched on several aspects that will be important to succeeding offensively against the Yellow Jackets, acknowledging that the forecheck will be a big part of the their game plan.

“As we talked about on a handful of occasions, against every team you’re only going to get so many opportunities to develop a 200-foot rush and generate one or two offensive opportunities off of it,” he said. “What we need to make sure that we’re doing is taking pucks away on the forecheck, taking those transition opportunities off the back pressure and generating as much offense as we can off of those concepts.”

Regardless of who the competition is or what the records may indicate, Micheletto knows a win against any team at this stage in the season is vital.

“We’re looking to get as much wind in our sails as possible. We’ve had a difficult stretch here ourselves, some of it by our own doing and some of it from difficult situations that were out of our control,” he said. “No matter who we’re playing, we’re looking at game momentum wherever we can and start putting good performances together, 60 minute performances.

“You do that playing one shift at a time and if we can do that tomorrow, hopefully we can feel better about what Wednesday brings in terms of practice and whoever our next opponent will be,” Micheletto added.

While it would be easy for UMass to overlook this game and focus on the home-and-home with the Huskies, Micheletto doesn’t feel that is something he has to worry about with his players.

“That is not a difficult situation for where we are, we’re happy to live in the moment,” he said. “Whenever things aren’t great, you’re actually trying to get your guys to worry less about the past and be more in the moment.”

He later added: “For where we are right now, it’s not about the future, and I know our players will be ready to give AIC every bit of focus that they deserve.”

Currently in dead last in Hockey East, UMass will have the opportunity to slow down a red-hot Huskies team that is now 8-1-2 in its last 11 games after defeating Harvard 5-1 in the consolation game of the Beanpot Monday night.

Micheletto acknowledged Northeastern’s balance in defense and goaltending as a catalyst for its offense to be able to produce, and believes the Huskies are feeling confident.

For the Minutemen to find success, Micheletto wants his guys to “impose a relentless pace on them” and force the Huskies to play UMass’ game.

“They’ve always been a good offensive team, and that’s going to be important for us to make sure that we’re minimizing their opportunities and forcing them to earn every bit of ice,” he said. “We don’t want to allow their guys to either put pucks on the rush or give them possession.”

Recording only nine penalty minutes a game, Northeastern is one of the most disciplined teams in the conference. Micheletto knows that his team will have to value that first power play opportunity, if it comes, because they don’t know if they’ll get another one.

“Both Tuesday night as well as this weekend, I think AIC has only taken seven or seven and a half minutes a night, we’re going to have to really focus on five-on-five offense, that’s going to be the backbone of what we’re doing in all three of those upcoming contests,” he said. “As long as we have that sense of urgency when we do get a power play opportunity that we really do value it, that’ll be a helpful mindset to have.”

Puck drop is scheduled for 7 p.m. Tuesday night at the MassMutual center, with Friday’s contest set to begin at 8:30 p.m. and televised on the American Sports Network.