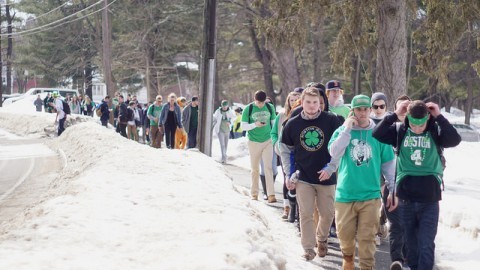 The University of Massachusetts alerted students Friday morning that it will again alter its guest policy in anticipation of the first weekend of March, which is typically when “Blarney Blowout” is held.

According to an email sent to the campus community, up to four UMass Amherst students may be signed in as guests beginning Thursday, March 3 at 8 p.m. and continuing through Sunday, March 6 at 11 p.m.

During this period, only UMass students, faculty, staff and emergency/health care response staff will be allowed in the residence halls.

Under the policy, residence hall security desk hours will be expanded in many residence halls over the weekend however the email did not specify in which residential areas.

The email, which was sent from Jean MacKimmie, director of residence education, and James Meade, manager of residence hall security, did not refer to Blarney specifically by name, but said the University is attempting to ensure another weekend of “success” after experiencing positive results in the “first weekend of March” last year.

The email also stated that, “Throughout the weekend, as circumstances related to safety and security dictate, the guest policy may be adjusted to ensure our campus remains a healthy, safe, and secure environment.  These adjustments include reserving the right to curtail or end guest registration by building or residential area.”

This kind of policy was first implemented in anticipation of celebrations following last year’s Super Bowl and again during Blarney Blowout. While it sparked considerable controversy and discussion in terms of restrictiveness, the University deemed it effective as both events were relatively calm and peaceful.

Since then, the policy has been implemented in regards to other celebratory events including last week’s Super Bowl game.