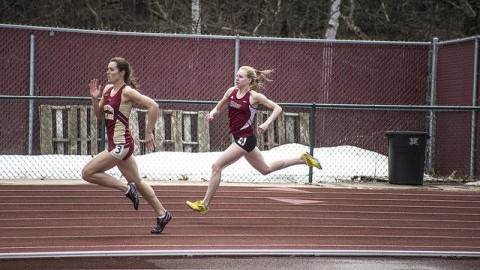 The Massachusetts women’s track team took first place this past weekend at the Coach’s Tribute Invitational at Rhode Island, while the men’s team saw strong performances from several athletes at the unscored Giegengack Invitational at Yale.

The Minutewomen scored a total of 168.5 points, winning by a comfortable margin over second place Brown (140) and third place Rhode Island (117.5).

“We didn’t place people in specific events in order to score the most points, we just wanted to sharpen people up. I guess the win just came our way, and the athletes were pleased and so were the coaches,” coach Julie LaFreniere said.

UMass benefited from a full complement of top performances across all events on the weekend. The goal for the coaching staff has been to build a team that is strong in all events and it is starting to pay off this season.

The top performance came from junior Kelsey Crawford in the shot put. With a throw of 46 feet, six and a half inches, Crawford took first and set the program record in the event.

On the track, the Minutewomen had three more individuals place first in their respective events.

Junior Heather MacLean earned first place in the 800 meter run with a time of 2:07.09, which was almost a full nine seconds ahead of the second place runner.

“The coaches were actually laughing during her race, she was so far ahead of the pack that the announcer didn’t even notice her finish, and he announced the UNH runner as the winner,” LaFreniere said.

In the 3000 meter run sophomore Colleen Sands also earned a first place finish with a time of 10:01.

Freshman Emilie Cowan in the 500-meter run took first in with a time of 1:13.07. Her indexed time for the flat track at 1:12 would count as a school record, but due to the fact the index was recently implemented, it will not stand as the record.

The Minutewomen have displayed strength across the board at this point in the season, and LaFreniere realizes that the team has a chance to do something that the program has not done a long time.

“None of the teams at the top of the conference are going to hand us the conference championship, but I think mentally and physically we’re in a good place and I think we have a realistic shot at winning the conference,” LaFreniere said.

The Minutemen perform well, even without the scorecards

Coach Ken O’Brien wanted the meet this weekend to be low key to take the pressure off his team. In fact, most of the athletes for the Minutemen were not running their primary events.

“I think we accomplished what this meet was going to give us, we had some pretty outstanding performances, and we were able to cover both the wow factor and consistency,” O’Brien said.

The top performance of the meet for UMass came on the track in the 1000 meter run, where senior Ben Groleau came within seconds of a 29 year-old program record with a time of 2:25.

Groleau also managed to do so in the slower of the two heats of the event, and running largely by himself.

“It was a fortunate occurrence that he ended up being the cutoff man for the event, and he was able to apply himself in such a way that he was able to run a steady pace throughout the race,” O’Brien said. “He found a way to turn a negative into a positive and it was a great display of athletic maturity.”

The Minutemen also had several other strong performances, particularly in the distance races.  Senior Michael McNaughton also competed in the 1000 meter run and earned second place with a time of 2:30.

In the mile, junior Cory Thomas took second with a time of 4:11 and teammate Paolo Tavares followed with a fifth place finish at 4:13.

In the 60-meter hurdles, UMass had three of the top six finishers, led by senior Zack Grube with a time of 8.61 seconds. Senior teammate Kris Horn followed him at 8.90 seconds earning fourth, and sophomore Logan Cotto took fifth with a time of 9.05.

The Minutemen have seen flashes from the distance, multi-event and jumping groups in particular at different points of the season. With Atlantic-10 championships less than two weeks away, they will need all performers at their best.

“Usually you do your best to bring all of the athletes around at the same time, but you don’t always have control of it, but we have a lot of groups on the team that have shined at different points in the season,” O’Brien said.

Both teams will be sending a select group of athletes to the David Hemery Valentine Invitational this coming weekend in Boston. For most athletes, this was the last meet until A-10s at Rhode Island on Feb. 20.