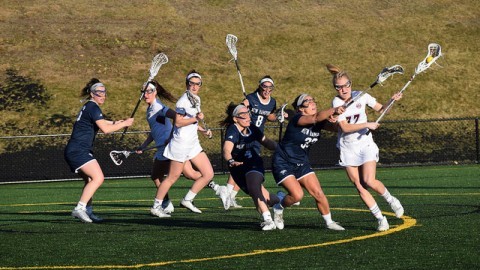 Garber Field will be the sight of an in-state showdown Wednesday afternoon, as the undefeated Massachusetts women’s lacrosse team faces off against the Boston University at 3 p.m.

The Minutewomen (2-0) are seeking their third straight victory, after blowing out both Holy Cross and  New Hampshire to begin the year, and are just outside the top 20 rankings, receiving votes in the Inside Lacrosse Poll

The Terriers (1-1) are the underdogs coming in, and look to upset UMass, who typically dominate matchups between the two teams. They last faced off nearly a year ago to the date of this year’s contest, Feb. 25, in a 7-2 Minutewomen victory on Nickerson Field in Boston.

Fresh off her Atlantic 10 Player of the Year award, senior attacker Erika Eipp continues her dominance for UMass with a team-high 12 points, including eight assists in the first two games. For her on-field production, Eipp was recognized as the A-10’s Co-Player of the Week for the first week of the season. Senior Anne Farnham was also awarded for her efforts against, earning the conference’s Defensive Player of the Week award.

“My goal is always to set my teammates up before myself,” Eipp said when asked about her unselfish play. “ (Opposing teams) usually don’t let me drive and get shots off, so I look for assists.”

Early on in the season, scoring has come in abundance for the Minutewomen. They netted 16 goals in each of their first two games, while only allowing an average of 4.5 goals to their opponents.

UMass coach Angela McMahon knows her team needs to maintain this level of play when the schedule gets tougher.

“We really need to focus on playing with great intensity,” McMahon said. “If we can keep playing as a team, we should keep winning.”

McMahon, who recently became the program’s all-time winningest coach in the opening night rout against the Crusaders, is not very unfamiliar with losing. Since coming to UMass six seasons ago, she has only lost 12 games, however her lone loss against a non-ranked opponent was against the Terriers when the Minutewomen lost 9-8 in overtime Feb. 27, 2013.

BU is looking for a big-time win after splitting their first two games. The Terriers got their season started with an 18-9 defeat at the hands of powerhouse Boston College, followed by a momentous 13-8 win over last year’s Metro Atlantic Athletic Conference champion Fairfield this past Saturday. The victory was coach Liz Robertshaw’s 100th as the head of BU.

Attacker Jenny Thompson is the Terriers leading scorer, with seven goals, coming on only eight shots, good for an 87.5 percent-shooting mark. Fellow attacker Mallory Collins and midfielder Ally Adams are the team’s next two leading scorers, both with six points apiece. In the possession game, these three have combined for more draw controls (12) this year than the next 15 Terriers combined.

In cage for BU is sophomore standout Christine Laible. Despite the Terriers defense, she has kept them alive in both games this season, making 10 saves in their win over the Stags this past weekend.

For UMass, freshman goalkeeper Sam Walters is expected to make her third start of the season. Walters and sophomore Aileen Kelly have split time this season, both posting a save percentage of .500.

Wednesday’s game is the third of a four-game homestand to open the Minutewomen’s season. After finishing out against Yale on Garber this coming Saturday, UMass will travel across the state to challenge a much more daunting in-state foe: No. 14 ranked Boston College.

Wednesday’s game is set to start at 3 p.m. at Garber Field.