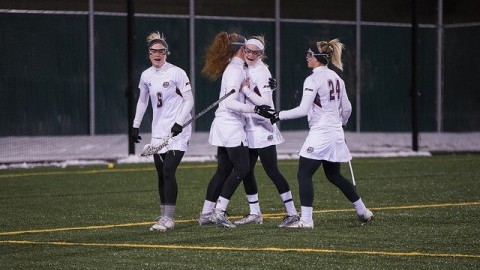 Heading into a new season in any sport, it is an expectation that the upperclassmen will step up as leaders and get the younger players on board with what the program is all about. The experienced players set the tone and everyone else follows suit. It’s an unwritten rule that is consistent across all sports.

The Massachusetts women’s lacrosse team is no different in this regard. The 2016 incarnation of is not only returning great leaders, but also a talented core of players as well.

Minutewomen coach Angela McMahon believes the leadership her upperclassmen provide valuable to the success of them both in the past and moving forward.

“It’s critical, not just because of how good they are as players, but what amazing leaders they are and great teammates.”McMahon said.

One of the talented players returning is reigning Atlantic 10 player of the year Erika Eipp, who finished her junior year with 45 goals and 30 assists. Her 75 points were tied with 2014 graduate Katie Ferris for fourth-most points in a single season in program history.

More importantly, Eipp has proven she could step up in crucial situations for the Minutewomen, as she finished 2015 with five game-winning goals.

During the NCAA tournament last year, Eipp scored five goals in the first round win over Jacksonville and had a four-goal, one-assist performance in the loss against Maryland in the following matchup.

Also returning for the Minutewomen is reigning A-10 midfielder of the year Hannah Murphy. Murphy, a junior, will control the pace of the game, as well as put the ball in the net. She led the team in goals last season with 46, while adding 11 assists, giving her the second most points on the team from last year, trailing only Eipp. Murphy set a UMass school record with 113 draw controls last season as well.

Defensively, the Minutewomen are returning three of their four starters from last year’s No. 2 ranked unit. Senior twins Anne and Kate Farnham, along with senior Amber Tobin highlight the experienced defensive corps and are expected to play a bigger role with the departure goalkeeper and A-10 defensive player of the year Rachel Vallarrelli.

The Minutewomen are full of experience this year, as this year’s group of seniors has won the A-10 conference championship every season they’ve been on the team, contributing to their current 48-game winning streak in conference play. McMahon sees that this group has the potential to do some great things, and hopes that they can add to their already impressive resumes.

“This is a really special group and I think they’ve had outstanding careers here, three A-10 championships, winning an NCAA first round game last year and we’re just striving to be better and make it farter and hopefully be the best team we can possibly be,” McMahon said.

She added: “There isn’t a practice or day that goes by where they aren’t putting in that extra something and I think that has turned to be contagious amongst the team,” McMahon said. “They bring a ton of positive energy, everyone is excited, they love competing, they love being together. That core group of seniors and a couple of those juniors epitomize that.”