‘Youth’ is a self-indulgent bore 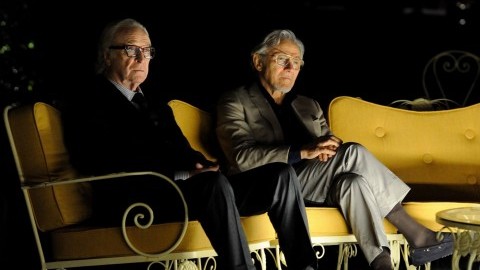 “Youth” is noxiously bad. Fascinatingly bad. At times it feels like a modern art piece, as if all our senses are subjected to a hypnotic ballet of insufferable moment after insufferable moment. It’s so bizarrely inane that I’m almost tempted to recommend it, though not in the same manner one would recommend “so bad, it’s good” type fare.

The film is so bad that it never ceases to linger on the mind. I couldn’t believe that I watched something that perversely incompetent. Like its main characters, it invites the viewers to pontificate on how they found themselves in such a sorry situation. They wonder what sequence of events led them to their current predicament and I wondered what sequence of events led me to this screening when I had so many better things to do.

The plot revolves around Fred Ballinger (Michael Caine), a retired classical music composer who resides in the Swiss Alps at a luxury resort. He hasn’t written a note in years, yet that fact doesn’t stop the Queen of England’s emissary to come knocking and request that he perform his famous piece “Simple Songs” for her husband’s birthday.

Ballinger isn’t having it though and turns down the Queen’s request, although he refuses to offer a reason as to why. What we do know is that he no longer wishes to perform. Events in his past have dampened his creative spark. Resigned to his fate, he ponders over his inability to recollect key moments in his past amidst a backdrop of gorgeous landscapes and crystal-lit pools.

Meanwhile, Fred’s lifelong friend Mick Boyle (Harvey Keitel), an acclaimed film director, has assembled a team of young hipster screenwriters to work on his latest film, which he insists will be his magnum opus. Like Fred, he may be far past his prime, though instead of Fred’s portentous complacency, he futilely refuses to admit that his halcyon days of youthful exuberance have long since come and gone.

We’ve heard this story before. Once again we must bear witness to the elderly, heterosexual, upper class white man as he wallows in misery over his advanced age. Thankfully, Fred and Mick have the luxury of a scenic European resort to decorate their tedious palaver.  “Youth” aims to invoke sympathy from our heroes’ ennui, although it’s difficult to muster much sympathy when it looks like they live inside a holiday postcard.

Director Paolo Sorrentino commits so much navel-gazing throughout “Youth” that it would make freshman year philosophy majors blush. He injects his dialogue with so many pieces of faux-wisdom and asinine non-observations that I felt like my eyes would pop out of their sockets after I’d rolled them one too many times.

There’s simply no justification for Sorrentino’s pithy little nuggets of truth like “these two are in love, but they don’t know it yet” or “levity is also a perversion.” It’s possible that these lines work better in Sorrentino’s native Italian, yet one can’t help but wonder if he wrote the film’s script in his language, threw it into Google Translate and never revised the finished product.

Yes, Sorrentino is a technically-gifted filmmaker. He knows how to compose a pretty image, yet doesn’t seem to have much regard for the meaning behind that image. There’s a scene in which Fred conducts a symphony to the tune of cows mooing (and yes, it makes about as much sense in context) that is as beautifully sequenced as it is utterly nonsensical.

His work reminds me of that of Alejandro González-Iñárritu (director of “The Revenant,” among other films): a director whose first priority seems to be to establish himself as a “great and important filmmaker” even when his efforts amount to something rather sophomoric. Whether you make it look like you shot your movie in one take or dress Paul Dano up like Adolf Hitler (yeah, this happens too), it’s all signifiers and no substance.

This thematic shallowness is compounded toward the final third, at which point the narrative jettisons Ballinger’s symphonic self-pity and switches the point of view to Boyle’s cinema-centered self-pity.

For almost a half hour, we follow a disconnected plot point where Keitel wanders around the Swiss Alps, meets with a grotesque caricature of a washed up muse (played by Jane Fonda, one of many actors who deserve better than what this movie gives them), waxes a bunch of poetic twaddle, and then ends as abruptly as it begins, all so Sorrentino can make some snide remarks about Hollywood.

So what is “Youth” even about? The film clocks in at over two hours, yet behind the litany of random musical interludes, self-indulgent monologues, a cringe-worthy tangent about how indie rock is superior to pop music and the copious amount of ogling from crusty old men over every single female character, it seems as though Sorrentino does not have all that much to say, and he compensates by choosing to say what little he’s got in the most masturbatory way possible.

Is it really that profound an observation to say that growing old is a pain?