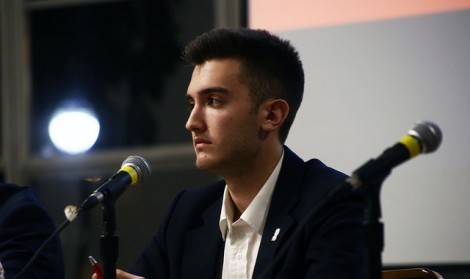 Vitale, a sophomore studying finance and economics, currently serves as the SGA’s secretary of finance and said he wants to help Registered Student Organizations function, improve student resources on campus and increase SGA outreach to students.

“People don’t care about student government because rarely does the SGA help the average student,” said Rampone, a sophomore studying legal studies and economics, and who previously served as the SGA’s

Vitale said that people should vote for their ticket in order to have their voices heard in student government. He said that their interactions with different groups have given them different ideas on how to improve student life and that they need the offices of SGA president and vice president to implement those ideas.

Vitale also said that he and Rampone would work to improve the SGA’s relationship with subsidiary governments, such as the Residence Hall Association.

“People feel comfortable coming to us with their concerns,” said Rampone.

Rampone, who is also the president of the Theta Chi fraternity, also said that he wanted to ensure that internal issues at the SGA do not negatively affect RSOs.

Vitale added that RSOs are currently being turned down or denied for small technicalities, “rather than the SGA doing its intended purpose.”

Vitale also said that student participation and representation in SGA needs to be improved through greater outreach programs.

“The SGA has abysmal voter participation rates in elections,” Vitale said. “Not even close to the entire student body is being represented.”

He said that when campaigning, he had spoken to roughly 500 students, out of whom he says 480 were not aware of the SGA.

“We’re not really going out,” Vitale said. “We should use our manpower, money and resources to make an impact on the students.”

The candidates also discussed The Hatch as part of their campaign platform. The Hatch was formerly a cafeteria in the Student Union basement, however the space is now unoccupied.

Rampone said that The Hatch would work perfectly as a location for RSOs and students to meet and interact with each other.

Vitale, who sits on the vice chancellor of administration and finance’s board, said that the administration had hired a designer to make The Hatch usable.

Vitale also said that he and Rampone would lobby against fee and tuition increases for UMass students.

He added that it is necessary for the SGA president and vice president to ensure that budgetary money goes to the correct places, as each budget cut results in students having to pay more.

“We’ll also make sure that the administration is not just pushing a cost onto the students,” Vitale said.

He and Rampone mentioned that their campaign is being driven by a strong presence on social media, and that their Facebook page received 300 likes within its first 24 hours.

Vitale added that they are posting fliers in dormitories, such as in the Southwest Residential Area towers.

“We have a network of individuals who will help us campaign,” he said.

The SGA elections opened on Campus Pulse on March 20, and will remain open until March 23. Vitale and Rampone are running against one other ticket: Khalif Nunnally-Rivera and Maija Hall for president and vice president, respectively.