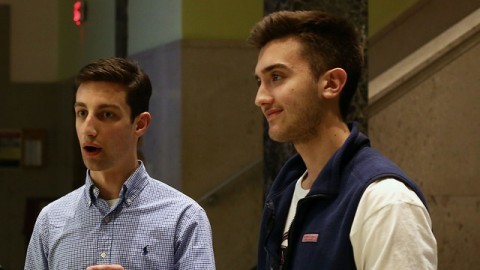 Anthony Vitale and Nick Rampone were unofficially elected president and vice president of the Student Government Association early Wednesday morning with 1,395 votes in the 2016 SGA Election.

Khalif Nunnally-Rivera and Maija Hall, who were also running for president and vice president respectively, received 1,261 votes. There were 134 write-in votes as well.

“We hope we are able to further what we’ve been campaigning on to make sure the students really do benefit and we further student representation here on campus,” said Vitale, a sophomore studying economics.

Rampone also thanked the Nunnally-Rivera and Hall campaign for “putting up an amazing competition.”

Josh Odam, who ran for the position of student trustee unopposed, was elected with 2,516 votes.

“I’m excited to work with Mr. Vitale and Mr. Rampone,” said Odam, a junior studying political science and legal studies. “I hope students of color and Young Metro trust them.”

Nunnally-Rivera said that, while disappointed with the results of the election, he and Hall planned to “continue to fight for the rights of the UMass student body.”

“The election results will mean we have to work even harder to accomplish the goals we set out to achieve, but we’re looking forward to a great year of working with all of you,” said Nunnally-Rivera, a junior studying geography and urban planning.

Matthew Martin, a sophomore majoring in legal studies and political science who was on the SGA Elections Commission, said it had tabled and brought laptops to the dining commons so students could vote there.

“We had to promote civic engagement,” Martin said. “We’re trying to get five percent of the student body to actually vote.”

Martin said the SGA had a good turnout so far and that he expected the threshold to be reached by the time polls closed.

Bobby Malinn, a sophomore studying political science, said he decided to vote for Vitale and Rampone after attending the SGA debate on March 10.

“I felt that they would fight for student businesses and a variety of other reasons,” Malinn said.

Malinn, a current SGA senator who represents the Central Residential Area, added he voted for Odam in the student trustee election because he was impressed with the candidate’s past experience.

One student, junior journalism and communications major Katie Donegan, said she voted for Nunnally-Rivera and Hall because of the ticket’s vice presidential candidate.

“Hall got my vote. She is interested in what I am interested in, a Bill of Rights for (sexual assault survivors) and what CERC is doing,” said Donegan, referring to the Coalition to End Rape Culture.

Donegan added she voted for Odam to become the student trustee, saying she knew him from his involvement with campus activism.

However, other UMass students said they weren’t aware of the SGA elections or the Association in general. Sam Bavelock, a junior studying food and farming sustainability, pointed to a Nunnally-Rivera and Hall flyer on her table at Blue Wall.

“I think that is the extent of my awareness,” she said. “I don’t even know what kind of decision-making the SGA really does.”

Ayshia Stephenson, a first-year Ph.D. student in the field of communications, would have been eligible to vote in the student trustee election but not in the presidential or undergraduate senator elections.

“I didn’t hear much about it,” she said. “I think an email may have come in. We get tons of emails on a daily basis.”

Taylor Mascari, a senior environmental science major, did vote in the SGA presidential election, although she could not recall the candidate she voted for.

“To be honest I don’t remember because I was voting with my friend,” Mascari said.

“He basically told me, ‘Oh, this person has your political leanings,’” added Mascari, who described herself as “pretty liberal.”

Editor’s Note: An earlier version of this article said that 22,748 undergraduate students were eligible to vote, a number taken from the fall 2015 enrollment. This number has since been changed to reflect the spring 2016 enrollment.