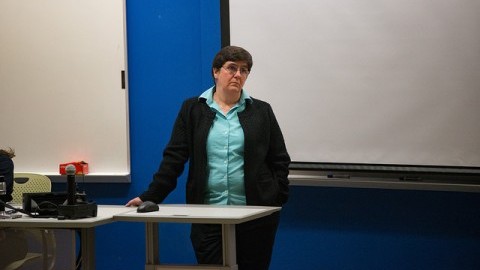 Trapped, a film by Dawn Porter that focuses on the fight for abortion rights in the United States, screened Wednesday night at the University of Massachusetts.

The screening was sponsored by the UMass departments of history, political science, legal studies and women, gender and sexuality studies, as well as Five College Reproductive Health, Rights and Justice Program, Smith Program for Study of Women & Gender and VOX UMass: Students for Reproductive Justice.

TRAP stands for “targeted regulation of abortion providers” and is used to describe legislation that creates barriers to provide abortions as a means of limiting abortion rights overall.

The documentary won the U.S. Documentary Special Jury Award for Social Impact Filmmaking at the Sundance Film Festival this year. It focused on the lives of abortion providers in states like Alabama and Texas, where TRAP laws have seriously impacted their ability to service women, driving many to face closing.

The film also discussed the passing of a Texas law known as HB2 which requires facilities that provide abortions to meet surgical center standards and abortion providers to have admitting privileges to local hospitals.

HB2 was famously stopped by Wendy Davis in a 13-hour filibuster. However, Gov. Rick Perry called a special session a few days later in which the bill was passed anyway. According to the film, these regulations have shut down more than 75 percent of clinics providing abortions in the state.

The screening of the film was timely as earlier this month the U.S. Supreme Court heard the oral arguments for Whole Woman’s Health v. Hellerstedt, the case challenging these regulations as an undue burden on women. The court is expected to release a decision in June.

Amy Myrick, an attorney with the Center for Reproductive Rights, the organization representing the clinics in Whole Woman’s Health v. Hellerstedt, Skyped in to answer audience questions following the screening.

Myrick said her colleagues at CRR were “ecstatic in November when the (court) decided to take the case.” She told attendees that the Supreme Court has not heard an abortion case since 2007 and has never heard a challenge to the TRAP laws. In terms of the court’s decision, “we are cautiously optimistic,” she said.

Diane Curtis, a senior lecturer with the department of political science and a pre-law adviser, explained that the country can most likely expect a five-to-three split in favor of invalidating the regulations, or a four-to-four tie which would result in a deference to the lower court, which has ruled to uphold them. However, that ruling would only affect the fifth federal district, which includes Texas, Mississippi and Louisiana.

Tami Rowen, an abortion provider in San Francisco and sister of Jamie Rowen, a UMass professor of legal studies who also helped coordinate the event, Skyped in as well.

With her experience as an obstetrician, Rowen explained to the audience that “90 percent of surgical abortions are almost exactly the same procedure” as intrauterine device (IUD) insertions and endometrial biopsies that are performed routinely by her practice. Neither of those practices are required to meet the standards set in TRAP regulations.

She went on to say that abortion, like IUD insertions and endometrial biopsies, are “extraordinarily safe” and that there is “no medical necessity to require providers to have admitting privileges.”