‘Broad City’ still as delightful as ever 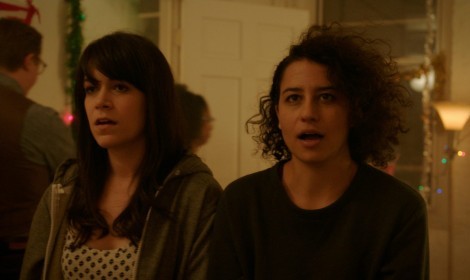 “Broad City” is, as always, a total joy to behold. There exist few other shows that display such a keen ability to capture the misery and amusement of millennial growing pains, all filtered through an unparalleled comedic voice.

Or voices, I should say. One of the pleasures of “Broad City” is the luxury of watching two of the world’s most charming comedians at the top of their game. Four episodes into their show’s third season, it becomes clear that Ilana Glazer and Abbi Jacobson have crafted a near-perfect formula for happiness and humor.

As was the case in the previous two seasons, Glazer and Jacobson demonstrate a mastery of comedy in both the written and visual form. Like a Jewish-American “Hot Fuzz,” Glazer and Jacobson make sure that every scene is filled to the brim with ace gags, cutaways, one-liners and surrealist imagery that amuse the eyes and the ears.

Take the fantastic montage that opens the season premiere. Divided by a split-screen, the fictionalized versions of Abbi and Ilana go about their daily activities in their respective bathrooms. A series of rapid edits establish the similarities and distinctions between the two, and epitomizes their characters.

Abbi somberly flushes her goldfish down the toilet while Ilana goes on a sexual escapade. We witness Abbi’s awkward neuroticism versus Ilana’s carefree hedonism. Of course, there’s still some qualities and interests the two share, like knitting, dancing and smoking pot. It’s a superb sequence that still begets new discoveries hidden in the background rewatch after rewatch.

At its center, “Broad City” is about a friendship between two women, and it is the way that dynamic plays out remains its most wonderful quality. Abbi and Ilana, who at once appear at opposite ends of the maturity scale, compliment each other’s flaws like the world’s most harmonious yin and yang twins. Television is starved for excellent portrayals of female friendship, especially ones built off mutual support rather than catty backstabs that stem romantic rivalry.

What grounds the friendship between Abbi and Ilana is its affection, banter and believability. Jacobson and Glazer never attempt to hide the imperfections and screw-ups that define their awkward ascent into adulthood.

Whether the dilemma involves a rogue rat in the apartment or the infiltration of a health food co-op, the most important thing about maturation is that it is accomplished in the company of people who love and support you. Abbi and Ilana may have disagreements and different outlooks, yet they always maintain their sense of love and support for one another, even if it’s a gesture as simple as complimenting the other’s butt.

The hijinks in which Abbi and Ilana find themselves grow increasingly bizarre with every season. In the first, they tried to get into a Lil Wayne concert. In the second, Abbi went on a drug trip induced by a wisdom teeth operation. In the third, the pair attempt to switch bodies (it makes more sense in context).

Nevertheless, in spite of its moments of brassy irreverence, “Broad City” grounds itself in a relatable sense of emotional truth. As weird as the show often gets, there’s never a moment of doubt that it comes from a place of 100 percent witty, touching sincerity.