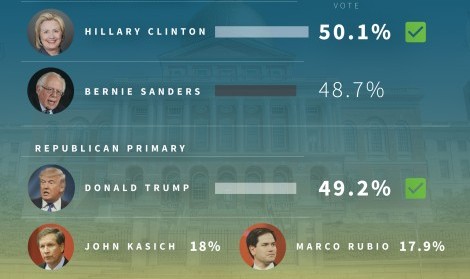 Hours after Donald Trump had been declared the winner of the Massachusetts Republican presidential primary, the Associated Press declared Hillary Clinton had won the state’s Democratic primary shortly after 11:30 p.m.

The length of time it took to report the results of the Democratic primary reflected how close the race between former Secretary of State Hillary Clinton and Vermont Sen. Bernie Sanders was, as Clinton was declared the winner with 50.5 percent of the state’s Democratic vote compared to Sanders’ 48.3 percent, according to the New York Times.

The state’s Democratic delegates, who are distributed to the candidates proportionally depending on the amount of the vote they receive, were split between Clinton, who won 44 delegates according to the Associated Press, and Sanders, who won 41 in Massachusetts.

In the Republican race, Trump received 20 of the state’s delegates, as Rubio and Kasich reached seven delegates each. Texas Sen. Ted Cruz, who received 9.2 percent of the Massachusetts Republican vote, won three delegates in the state.

In the Democratic primary, the two candidates’ bases of support could be seen in the amount of towns and cities which supported each. While Sanders won a clear majority of the towns in Massachusetts, Clinton’s success in the greater Boston area and in large cities such as Worcester, Springfield and Lawrence propelled her to success in the state.

All of Massachusetts’ municipal areas were dominated by Trump in the Republican primary, as he won both an overwhelming majority of the towns in the state as well as all of the major cities besides Cambridge.

The 116 Democratic delegates decided by the Massachusetts primary is tied with Georgia for the second largest amount contested by any state polling in the Democratic Presidential primary on Super Tuesday, behind Texas.

The Massachusetts GOP Chair Kirsten Hughes released a brief statement on the Massachusetts primary which, surprisingly, did not mention Trump. Hughes instead congratulated all of the Republican candidates for inspiring a “record-breaking turnout here in Massachusetts.”

In the town of Amherst, Bernie Sanders won the Democratic primary with 5,293 votes and John Kasich won the Republican primary with 220 votes.

Stuart Foster can be reached at [email protected]