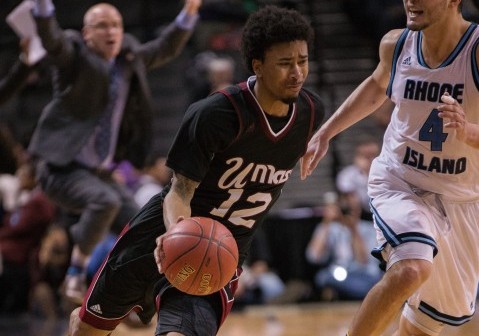 But in Thursday’s second round matchup in the Atlantic 10 tournament against Rhode Island, UMass (15-17, 7-12 A-10) flipped the script in a 67-62 win at Barclays Center in Brooklyn.

Moments after URI’s Jared Terrell nailed an open 3-pointer from the corner to give the Rams their first lead of the game with one minute, 49 seconds remaining, UMass senior guard Trey Davis raced down the floor out of a Minutemen timeout, drove into the lane and drew the foul on URI (17-16, 9-10 A-10) guard Four McGlynn.

After Davis hit two free throws to retake the lead, UMass then got the defensive stop it needed on the other end of the floor, giving the Minutemen an opportunity to clinch the victory and avoid another late letdown.

Davis answered with a contested step-back 3-pointer over the outstretched arm of McGlynn with 33 seconds remaining to ultimately extend his college career at least one more day and send UMass to the A-10 quarterfinals.

“I wanted to get just a cushion for us. Once we got that, I was like, ‘We’re good,’” Davis said after the win. “That was a good stop.

“I’ve seen him do it quite a few times this season, and it gave us a nice four-point lead. It was a play that – we were kind of struggling to score for a while,” UMass coach Derek Kellogg added. “We started walking the ball up the floor and I think that was the obvious play that ended up giving us the victory.”

Davis’ 3-pointer was the Minutemen’s first field goal since Jabarie Hinds converted a layup at the 10:39 mark in the second half. The drought from the field allowed URI – which trailed by as much as 18 late in the first half – to storm back into the game and threaten a comeback.

UMass carried a 37-27 lead into the halftime break behind a stifling start from Hinds, who had 17 points on 7-of-11 shooting in the opening frame. But the Rams closed the half on an 8-0 run and carried that momentum into the start of the second half as URI continued to chop at the Minutemen’s lead.

Prior to Thursday’s matchup, Kellogg emphasized that UMass would need to set the pace early and raise the tempo against a Rams team that likes to slow down the game. While the Minutemen were successful with this early on, Kellogg said UMass struggled to maintain the level of energy early into the second half.

“Maybe we got tired some because I was yelling about as loud as I can in a positive way to push tempo, and walking that thing up for about five or six minutes and that’s when we were struggling to score,” Kellogg said. “Quite a few times we’ve played pretty good defense and never really capitalized.”

But UMass avoided what would have been its sixth loss this season when leading at halftime behind Davis’ timely shooting and key defensive stops in the final two minutes following Terrell’s 3-pointer.

Hinds said the biggest difference between the Minutemen’s victory over URI Thursday and their loss last Thursday against the Rams in Rhode Island was UMass’ ability to battle back from adversity at a neutral site.

“I think we fought harder throughout the whole game,” Hinds said. “Some parts of that game last week was down, they had momentum, and they were home. Like Trey said last week, I remember we was in the media, he said, it’s a neutral site, so it’s going to be a whole different game, and that’s what it was today.”

Hinds finished with a game-high 21 points while Davis followed with 20 (14 in the second half).

The Minutemen will now face No. 2 seed Virginia Commonwealth in Friday’s quarterfinals, starting at 6:30 p.m.