Cyr: Weeks like these remind us of why we love sports 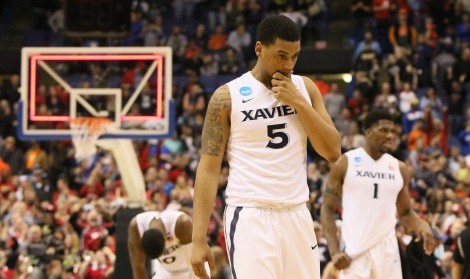 What a week for sports.

After we all survived the worst time of year – the time in-between the Super Bowl and the start of the NCAA basketball tournament – the sports gods rewarded us for our patience and week worth of rich, juicy storylines that have ranged from half-court buzzer beaters, to Adam LaRoche walking away from baseball because his kid couldn’t come to work every single day, to upsets and more.

Weeks like this remind us why we somehow talk ourselves into thinking its OK to sit on the couch for more than 12 hours each day for four days watching college basketball.

But before we dive into the national storylines, let’s first take a look at what happened with the University of Massachusetts while we were away.

Rumors for the next hockey coach are already starting to float around after College Hockey News’ Mike McMahon said his sources were telling him that UMass has already began talks with at least one Hockey East coach. McMahon suggests that list could include Connecticut’s Mike Cavanaugh, Merrimack’s Mark Dennehy or Maine’s Red Gendron.

However the most important news in the search for John Micheletto’s replacement came when current Union head coach and Springfield native Rick Bennett told CHN that he is staying with the Dutchmen and won’t be heading to Hockey East.

“As far as the UMass position, obviously I am honored and humbled to be considered in the mix,” Bennett told CHN. “But I think it was a lot of noise.”

“Union has stepped up and made a commitment to Union hockey with the renovation coming. I’m focused on that,” he continued.

Bummer. A lot of fans would have loved to see Bennett come to UMass and turn the hockey program around. Bennett won the 2014 national championship when Union defeated No. 1 overall seed Minnesota 7-4 in the finals. He took the Dutchmen to the Frozen Four in his first year as their head coach and has accumulated a 93-41-25 record in his four seasons at the helm.

Men’s lacrosse ended its non-conference play with a respectable 4-4 record in one of the hardest schedules in college lacrosse after losing its best offensive player and goalkeeper from a season ago. The Minutemen (4-4) have already played six ranked opponents and the always tough Colonial Athletic Association schedule hasn’t begun yet. But with their last two wins coming against No. 20 Penn State and at the time No. 10 North Carolina, UMass coach Greg Cannella has to be pleased with the direction the Minutemen are heading with crunch time approaching.

The women’s lacrosse team faired out much better than the Minutemen in its game at “The Big House” topping the Wolverines 15-5 Friday afternoon. UMass football fell to Michigan 63-13 in its third ever game in Football Bowl Subdivision football back in 2012, but this time it was the Minutewomen (6-1) who walked away with the victory.

I don’t expect any more losses for UMass this season. After the Minutewomen’s only regular season loss came against Albany last year, I think they’ll even the score against the Great Danes at Garber Field Wednesday. With the Atlantic 10 schedule right around the corner, UMass is on its way to a potential eighth straight A-10 title. With Erika Eipp, Nicole Troost and Holly Turner all over 20 points this season, mixed with the veteran defensive unit of Anne and Kate Farnham and Amber Tobin, the Minutewomen have no shortage of talent, and UMass coach Angela McMahon always has them prepared regardless of the opponent.

UMass baseball (3-7) and softball (6-16) are off to a slow start in 2016. It’s tough being a college baseball or softball team in the Northeast. Taking grounders in the dustbowl that is Boyden Gymnasium can only get you so prepared for live action while waiting for the fields to be ready and the weather to heat up. The Minutemen have their home opener Tuesday against Holy Cross, while the Minutewomen begin A-10 play with a three-game series against Fordham next weekend in the Bronx.

Junior Heather MacLean finished ninth in the one-mile final at the NCAA Indoor Track and Field Championship last weekend. MacLean finished with a time of four minutes, 43.29 seconds in a field of 10 runners, placing third in her heat and overall preliminaries. Not a bad showing at all from the Peabody native.

How about the first two rounds of March Madness? Whether it was Northern Iowa’s last-second, half-court buzzer beater to down Texas, Cincinnati’s dunk waived off over a matter of hundredths of a second to advance Saint Joseph’s, or Middle Tennessee’s once-in-a-blue-moon upset over Michigan State in the round of 64, this past weekend showed why there’s nothing like the NCAA tournament. Games from noon until midnight, what more can you ask for?

Saturday’s best basketball game wasn’t even a part of March Madness. It came from San Antonio where the Spurs and Warriors played the best regular reason game I’ve watched in years. Sure, Oklahoma City and Golden State played an ESPN instant classic back on Feb. 28 when Steph Curry hit a 40-foot overtime bomb, but watching the way the San Antonio and the Warriors played defense against each other made it basketball delight.

The Spurs held Golden State to a season-low 79 points and Curry to a 4-for-18 (1-of-12 from 3-point range) shooting performance, finishing with just 14 points. Oh, and the guy by the name of Tim Duncan came off the bench for only the third time in his career, playing only eight minutes because the matchups weren’t in San Antonio’s favor with both Andrew Bogut and Festus Ezeli injured and Golden State playing small ball. Now that’s my kind of superstar.

Anyone who doesn’t want a Spurs-Warriors Western Conference Final to go seven games doesn’t like fun, either.

With Jae Crowder still sidelined with a high ankle sprain, the Celtics are in a free fall in Eastern Conference standings after dropping three games last weekend against the Pacers, Thunder and Raptors. Only 4.5 games separate Boston and No. 8 seed Chicago, which is amazing to think about when not too long ago many people thought the Celtics were easily running away with the third seed in the East.

Don’t read too much into the Kevin Durant stuff either. He was asked questions about Boston – both the city and organization – and answered them politely.

“I like the city a lot,” Durant told reporters prior to the Celtics-Thunder game last Wednesday. “It’s cold, but they love sports here. It’s a family atmosphere I feel when I walk around the city, so yeah, I like it a lot.”

“I’ve been watching this team a lot. They’re scrappy. They play hard. They love their coach. They love their system, and especially in this building, they play with a lot of energy,” Durant added.

What else did you really expect him to say? Has there ever been an athlete to go on the record saying how much they hate a city and its fan base? Durant was being nice. While the idea of Durant in green playing with this supporting cast for Brad Stevens would be phenomenal for Celtics fans to dream about, I don’t know how plausible it really is.

How bizarre is this LaRoche story? The 12-year Major League Baseball veteran left $13 million on the table and walked away from the game after White Sox executive vice president Kenny Williams told LaRoche that his 14-year-old son, Drake, wasn’t allowed in the team clubhouse every game of the season.

I don’t blame LaRoche for walking away from the game. If he wants to spend time with his family, I have no problem with him calling it quits. Family always comes before work. But could the White Sox have botched this any worse than they did? Players like Chris Sale have gone on the record and said that Williams lied to the team about the subject matter and according to the Washington Post, Chicago almost protested a preseason game because of it.

There has to be much more to this story that we haven’t or will never hear, but at least it isn’t about chicken and beer.