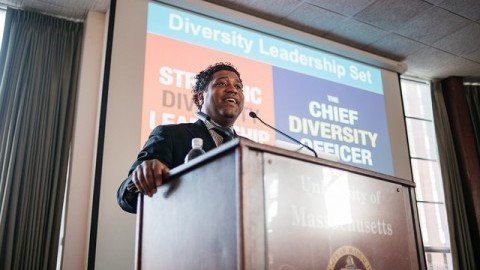 Damon Williams spoke to top members of the administration Tuesday evening in the Cape Cod Lounge in order to address exactly how a university can transfer aspirations for diversification into action.
Following the student-led protests at the University of Missouri last fall, the lack of diversity on college campuses has dominated national headlines. After a walkout orchestrated by the Black Student Union at the University of Massachusetts in November, the administration held a series of community discussions regarding how the University can make the campus a more inclusive environment.

Officials outlined a strategic diversity plan as a way to move forward but received criticism from students that there was a lot of talking taking place with few results.

Williams, the senior vice president of program, training and youth development services for the Boys & Girls Club of America, told the crowd of approximately 50 people that in order to get results when it comes to diversity, one must identify the most pressing issues and formulate pragmatic solutions.

Ultimately, diversification requires an honest assessment of obstacles and the courage of individuals to visualize solutions without getting bogged down in the abstract questions that surround the definition of diversity, according to Williams.

“For me, so much of life is about understanding and grappling (those) burning questions,” Williams said.

Williams began his lecture, titled “Towards a Model of Inclusive Excellence and Change: Building A New Generation of Global leaders,” by outlining the logistical benefits of having a diverse population at institutions as well as in the workplace.

“Diversity is a matter of economic national security,” Williams said.

Throughout his lecture, Williams emphasized that successful diversification begins with small-scale execution.

According to Williams, one of the best pathways to success is reached through incorporating tactics of the already successful and adjusting those tactics for future use. He emphasized the need to identify what makes an individual successful, to isolate what in the “DNA of innovators” makes them so effective.

“What makes Donald Trump a compelling speaker? You may not agree with his politics, but it’s still damn compelling television,” Williams said.

He said what lies in the core of innovators’ DNA is a welcoming of change and a willingness for experimentation. He said while conversations about challenging issues are constructive, in order for the conversations to have meaning, they must lead to concrete action.

Williams emphasized the importance for individuals who are tackling the issue of diversity to have courage to challenge the status quo. In order for change to follow, the conversation must include all groups and not just the populations affected.

He explored a pathway to this solution by referencing an anecdote regarding a colleague who worked at the University of Miami. The campus was commuter-centric and lacked a sense of community, according to Williams. His colleague’s solution was to place vendors and lawn chairs on campus that would draw students together.

He said the approach reflected an instinct to capture the “low-hanging fruit” and was an example of how small initiatives can have immediate impact. He suggested that UMass should have a similar approach to “utilizing their geospatial resources.”

Williams added that placing cultural centers in the center of campus where they’re visible to the community. Bringing the physical aspects of an abstract issue from the fringes can lead to concrete conversation and action. Such approaches can change the ritual and traditions of those present in the community, which is a pivotal step towards change according to Williams.

Williams followed this point by exploring the concept of tempered radicalism. He defined the term as an approach where an individual has radical ideas but implements these ideas while navigating an established network. While he said idyllic desires are important, they must be implemented in a way that produces results.

“If someone says, ‘Well I’m a radical but I’m not tempered,’ I would say that, ‘Well that must mean you’re ineffective.’ I’m all about winning, about producing results,” Williams said.

He referenced the process of a professor gaining tenure as an example. In order for someone to reach a position where their actions have any considerable effect, they must navigate the existing framework, even if the framework is one of the targets of change. Williams said that some systems are sacrosanct and will not change to accommodate an individual unwilling to play into the tradition.

“(But) once you reach that level of capital, you can implement change…You have to recognize what it takes to be successful in that context,” Williams said.

Williams concluded his talk by addressing why some diversity plans fail. He stated that a plan cannot be successful without “AIIR,” or accountability, infrastructure, inclusion and resources. He added he didn’t notice much about accountability in UMass’ diversity plan.

Another point of struggle in implementing effective diversification is a lack of collaboration. Universities approach the issue in a piecemeal fashion and end up missing vital connections that could lead to results. But without the necessary resources, nothing will change, according to Williams.

Stuart Foster contributed to this report. Brendan Deady can be reached at [email protected] or followed on Twitter @bdeady26.