Dear Senators, do your job 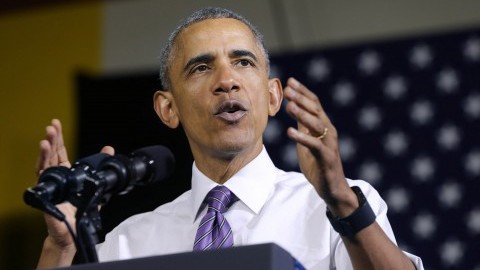 In light of the vacancy on the Supreme Court left by the late Justice Antonin Scalia, there’s been a lot of talk about whether or not President Barack Obama can nominate a justice during an election year. Senate Republicans said they will not hold hearings for Obama’s nominee. Various reasons are an apparent “tradition” and that the people of the United States deserve to have a say. Now, none of these reasons are cited in the constitution. And, none of them carry much weight to the problem at hand. I say to our Senators: Do your job.

The claim that the American people should have a say has nothing to do with the process. The process, according to the constitution, is that first a president names a nominee, who is then vetted by and voted on by the Senate. Congress holds the power to vet and vote on the nominee, but by refusing to even give Merrick B. Garland a hearing is going against their job description.

There is no mention of asking for the public’s opinion or taking into account the public’s opinion. The founding fathers did not trust the general public (ex. the Electoral College), so there is no mention of the public’s opinion influencing the nomination vote. But if the Republicans do want to look at public opinion, there is a current Monmouth poll. The poll says the majority of the public thinks that Garland deserves a hearing, and even more (75%) think this is a politically charged blockade. The Supreme Court nomination process is supposed to be done by government officials to find a fair judge for the bench, not used as a partisan political tool.

This claim is completely partisan and should hold no weight in going forward with Senate hearings. Nothing in the constitution says this nor has anyone followed this so-called “tradition.” Republicans that are blocking the nomination from going through are obstructing the political process just because of partisan politics.

This issue should not be solely a partisan issue. It should be a bipartisan collaboration.

“We don’t work as Democrats or Republicans and I think it’s a very unfortunate impression the public might get from the confirmation process,” Chief Justice John Roberts said just days before Scalia’s passing. The way I see it, Senators have a duty to their constituents and to their whole country to assist in picking a justice for the Supreme Court. By not doing their job, they are wasting taxpayer dollars and not being objective.

Overall, this should not be an issue. There is no legal basis and no reasoning to back up why the Senate cannot hold hearings. There is no tradition and there is no need for the public to be involved. Obama has picked a fairly moderate candidate and it would go against the constitution if the Republicans did not hear his nomination. The vacancy needs to be filled and it must be done appropriately. The Republican Senators need to do their job. If this was a Republican president versus senate Democrats, the Democrats shouldn’t be supported either. It is the job of the Senate to vet and vote on Supreme Court nominations.

Obama has gotten to nominate two other justices and frankly, that makes the Republicans mad. They do not want there to be a left-leaning majority on the court. But there always has to be majority on the Court, which was previously right-leaning. It is a fact of the American political system. The Senate needs to understand that. They need to do their jobs. So, Senate, go do your jobs.