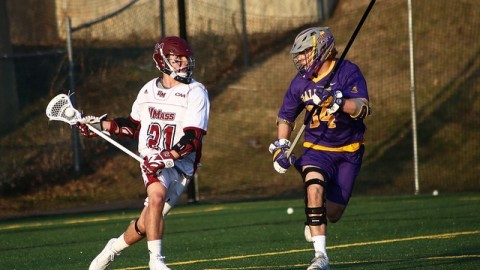 The Massachusetts men’s lacrosse team is one win away from matching last year’s win total and it will have an opportunity to pick up that win this Wednesday against Delaware.

The Blue Hens are an easy team to overlook. They are 3-7 – the worst record in the Colonial Athletic Association – and are at the bottom of many offensive and defensive categories in the conference.

However, UMass (4-4) has not beaten Delaware since the 2013 season. Last year, the Minutemen fell to the Hens 10-9 at Garber field in the last game of the regular season.

The last two losses are enough for UMass coach Greg Cannella to believe that the Minutemen should not take this game for granted.

“They are pretty explosive on offense,” Cannella said. “This kid (Andrew) Romagnoli, (Paul) Major, (Steve) DeLargy, (Connor) Frisina, there’s a group of guys there, a couple of young guys a couple of older guys, but they can score in bunches. The goalie (Parker Ferrigan) had 17 saves against Rutgers. They are winning 57 percent of their faceoffs so there is a lot that you have to play against.”

Even though the Hens have played ten games this season (more than any CAA team with the exception of Fairfield) they still rank second to last in total goals scored with 87. The only team below them is UMass, which has only scored 77 goals in eight games. The Minutemen average 9.62 goals per game this season compared to Delaware’s 8.70.

With seven games down and five to go, the two week break between Penn State and the Blue Hens this coming Saturday has served as a midseason bye week. The scheduling was not typical, according to Cannella, but had to happen in order to schedule certain teams.

Delaware will be the first of five conference games that UMass will play this season.

The Minutemen finished their non-conference schedule on a very high note, upsetting No.10 North Carolina and No. 20 Penn State and before entering the Inside Lacrosse rankings. UMass was ranked 18th last week, and dropped one spot to 19 after its week off.

In the past, Cannella has expressed his desire for the Minutemen not to change their mentality at the start of conference play. The CAA contains dangerous teams – three of the six (Towson, Hofstra and UMass) have all been ranked in the top 20 this season. The Pride are also receiving votes while the Tigers (8-1) are ranked at No. 8.

The Minutemen struggled earlier in the season to string together consistent, consecutive performances until their back-to-back victories against the Tar Heels and Nittany Lions.

A win against Delaware will put UMass above .500 for the first time this year and help build on their momentum before Towson comes to Garber for its next home game on April 9.

Saturday’s game against the Blue Hens in Newark, Delaware is set to start at 1 p.m.