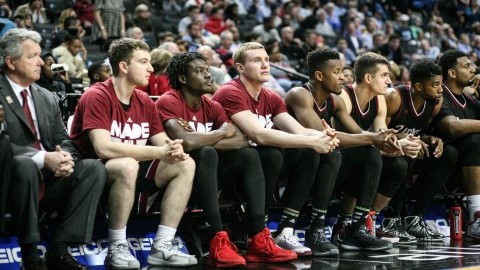 When the final seconds ticked away in Friday night’s 85-70 loss to Virginia Commonwealth in the Atlantic 10 quarterfinals, it marked the final chapter of an era for the Massachusetts men’s basketball team.

Five seniors walked off the Barclays Center court for the final time in Minutemen uniforms, including the last two key pieces who earned quality minutes during UMass’ 2013-14 NCAA tournament run, the program’s first appearance in 16 years.

“First of all, I want to thank my seniors for what they’ve been able to accomplish at UMass both on and off the floor. Those guys have been great to have as ambassadors at UMass, and I’m appreciative for those guys coming to UMass and helping us do some great things on the floor and off the floor,” Kellogg said.

Now, Kellogg and the returning Minutemen shift focuses to a 2016-17 season that, despite this year’s departures, will bring raised expectations in the form of an incoming freshman class headlined by two 4-star and two 3-star recruits.

“We lose some seniors, guys who have played a lot of minutes. I think everybody knows we have a good sized recruiting class and some guys sitting out that are going to have to be acclimated to the program,” Kellogg said. “So it’ll be an offseason of work, and I think that’s what it really is going to come down to.”

Kellogg said this will be an unusual offseason for him as UMass returns plenty of youth but not much senior experience, as walk-on Zach Turcotte and Canisius transfer Zach Lewis – who sat out 2015-16 due to NCAA transfer rules – are the only current juniors on the roster.

Kellogg also noted that he’ll be patient in seeing which returning players will take the leap as leaders on and off the court to replace the responsibilities largely taken by Davis and Hinds in the backcourt, as well as the rest of the 2016 senior class.

“When it works itself out and it’s kind of organic, it’s much better than when the coaches try and push someone to be a leader,” Kellogg said. “But I think we’ll have some strong personalities that will start coming through, and a lot of times through attrition seniors move on and maybe a guy you didn’t know would step up.”

Kellogg also noted freshman center Rashaan Holloway as a candidate for this role, saying he’s been increasingly vocal toward the end of his first season.

Holloway closed out his freshman campaign with 16 points in a career-high 29 minutes against the VCU. After struggling with foul trouble and conditioning issues for much of the season, the 6-foot-11, 335-pound center reached double digits in points in four of his last five games, including both of UMass’ outings in the A-10 tournament this weekend.

In his final press conference Friday, Davis praised Holloway for development this season and offered hope for him entering his sophomore season.

Entering the offseason now, Kellogg said Holloway must stay “self-disciplined” in terms of continuing to get in better shape next season and conditioned enough to be effective for increased minutes next year.

UMass finished 15-18 in a season that started promising with a 5-1 start in its non-conference schedule. But the Minutemen struggled as they hit the midseason point, highlighted by a seven-game losing streak in A-10 play.

Moving forward, Kellogg said revitalizing the “UMass basketball” high-pressure, high-tempo style of play that led the Minutemen to the NCAA tournament two season ago is the main focus from a team standpoint.

“This is a profession now where it’s 365 days a year. There’s not a break anymore where, ‘Oh I’m going to take a week off,’ there is no time,” Kellogg said. “My goal is to just have a team that’s ready to go and play ‘UMass basketball.’ We’ve done that at times throughout the season, never were able to press quite as much as I would have liked and that’s the goal for the future.”