Drawing parallels between the Syrian and Irish refugee crises 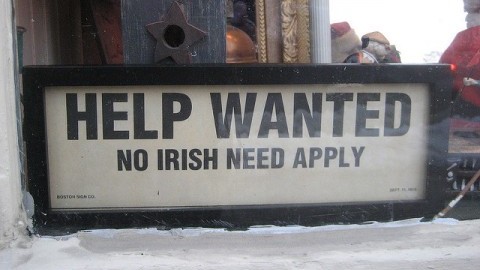 I was traveling on my way to New York City to see the St. Patrick’s Day Parade last Thursday when the radio announced the fifth anniversary of the start of the Syrian war. The war has left 4.6 million Syrians as refugees, begging for safety from any country that will take them. It was in that moment that I was reminded of the Irish famine and how over 2 million were forced to leave the country of their origin to find a better life. According to the U.S. Census Bureau, 33.3 million Americans, about 10% of the population, reported having Irish ancestry.  Personally, I was struck by the eerie parallels between the Syrian refugee crisis and the results of the Irish famine nearly 200 years ago.

There are certain traditions ascribed to the celebration of Saint Patrick’s Day in America, like drinking green beer, wearing green apparel and listening to the Dropkick Murphys. Two hundred years ago, however, the Irish were not celebrating but rather fighting off starvation. The primary crop that many Irish farmers and tenants subsisted on, the potato, was plagued by a fungus that made it inedible. Over the course of the famine, which lasted from 1844 until 1852, it is estimated that as many as one million Irish people starved to death. By comparison, the Syrian Crisis has claimed the lives of over 250,000 so far, according to the United Nations in 2015.

Over a million Irish people died, but many more immigrated to have a better life. From 1820 to 1860 almost two million Irish immigrants arrived in the United States, where they eventually became a huge part of the population. Many came to America wearing outdated clothing, speaking only in strong Irish accents or Gaelic, and having little to no money.  Because of their financial circumstances, they often could not move out west and had to stay on the east coast in cities that the ships brought them to. They took the worst jobs, which paid very little and were extremely dangerous. Many found that military service was the only way to get steady money that they could send back to their families as well as acceptance from the native community.

Much like we have Islamophobia today, Americans had Hibernophobia then, a similar sentiment for the Irish. The Irish were often depicted as drunken monkeys who were inferior to the Anglo-Saxons. The disclaimer NINA (No Irish Need Apply) could be seen in some advertisements. In fact, many groups viewed the Irish as a class below slaves, because they believed slaves provided value while the Irish did not. The Irish were targets of racism, persecution, bigotry and oppression, much like many Muslims face today with Quran book burnings and extreme violence.

The Irish have come a long way in this country to the point that they have become a large part of the American story and culture. However as a country we still let hatred and fear build walls around us to many other groups seeking asylum. We are letting our ignorance condemn thousands of impoverished people to death because of the actions of a few. Some might see certain Syrians as potential terrorists bent on the total destruction of the U.S., when in actuality they are simply ordinary people who want to find peace and a better life for their children, much like the Irish did not too long ago. When will there be an equivalent of a St. Patrick’s Day for the Syrians?