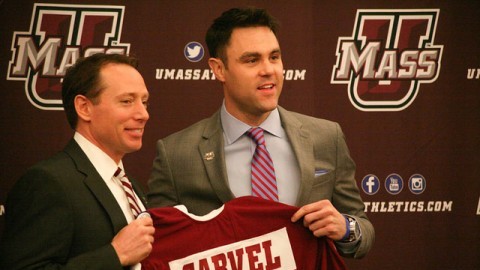 Sometimes you’re happy where you are and with the job you have, but sometimes, a better opportunity arises.

This was the case for Greg Carvel, who was introduced Thursday morning at Mullins Center as the newest head coach for the University of Massachusetts hockey team after spending the past four seasons at the helm of St. Lawrence.

Despite being fully invested in his job with the Saints, Carvel said he received an unexpected phone call from UMass athletic director Ryan Bamford about 10 days ago and in the end, made a difficult decision to take on a new challenge.

“I gotta tell you, I’m extremely excited to be here,” Carvel said. “It’s a wonderful day for me and my family. The connection that I do have with UMass and my wife and the area, like Ryan (Bamford) said, it all added up.”

“In four years, we took a team that was at the bottom of the league and in three, we pushed it to the top of the league,” Carvel added, reflecting on his time at SLU. “When Ryan first offered me the job, it was a very difficult decision, but every decision I’ve made in hockey has been about challenging myself.”

From the start of the search, Bamford said there was tremendous interest in the vacancy following the firing of John Micheletto, and knew Carvel was the guy from the first time they met on campus last Wednesday.

“This is a great day for our University, certainly for our department, and a real look forward for our hockey program,” Bamford said in a prepared statement. “We needed a leader, a teacher, a recruiter, someone who could be a role model for our young men … and so that led me to Greg Carvel.”

During his time with his alma mater, Carvel accumulated a record of 72-63-15, and previously spent 12 years in the National Hockey League from 1999-2011 with the Anaheim Ducks and Ottawa Senators.

With two Stanley Cup appearances and experience working under coaches such as Mike Babcock, Carvel knows the weight he carries from his experiences at the high level, even joking that he “has a PhD in hockey for working 12 years there.”

“Those are the experiences that carry a lot, and the kind of person I am, I’ve learned as much as I could, I learned different things from different people,” he said. “What I do know is I run my program like an NHL team. The way we practice, the way we train, the way we do video preparation, my kids I’ve had at St. Lawrence when they go pro, they say this is exactly the same thing. I think kids these days, that’s what they want and need.”

Freshman Austin Plevy, who recorded 24 points in his first year, said the team met with Carvel Wednesday night, and acknowledged the excitement that came following the meeting.

“I think 10 of us went to dinner after and it was like a couple of girls, we were so giddy we couldn’t believe it,” Plevy said. “We were so excited, everything he said and brought to us was awesome, and we couldn’t be more excited. He wants to turn it around, and we’re excited to get going.”

Known to be vocal with UMass fans on his own Twitter account, Bamford praised Carvel’s ability to connect with the community as a vital piece of the puzzle.

“We talked a lot about that in the process,” Bamford said. “The first time we met was last Wednesday night, it was great conversation regarding building and engaging with the students and this community and our alumni having a presence in this state, which is a state that cares about hockey.

“He recognizes it because he’s been here, he’s seen it, and he understands that. When I did my homework on him that was a strength of his at St. Lawrence. He is a unifier; he is somebody who can do that. That really resonated with me in this process.”

Carvel added: “I will work very hard to build this hockey team, but I will work just as hard to connect the student body to the team, the town, the alumni, and anybody in the state of Massachusetts who is a hockey fan.”

With several ties to the Amherst community, Carvel said he always loved returning home. He earned his master’s degree in sport management from Isenberg at UMass, and worked under coach Jack Arena at Amherst College in 1996. His wife, Daina, is from the area and graduated from Amherst Regional High School in 1989.

For Plevy, this hiring enhances his belief that the team is close to turning a corner and being a competitive team in the conference.

“I think you look at what we did against BU in the playoffs, and that was our best effort. We came real close to beating a top-10 team in the country, and I think you give us Carvel with a good system and we’re gonna be motivated to work for him,” Plevy said. “I think we have a really good team and a ton of skill and the margin is so small between good teams in college hockey that I think with a coach like Greg, we’re in a good spot.”

Now in a highly competitive conference like Hockey East, Carvel knows the challenges ahead, but is ultimately excited for the future.

“I always wanted to be right here, right now, and wanted to do it at a place where I thought I could make a big, big splash,” he said. “This is obviously the right place at the right time for me.”