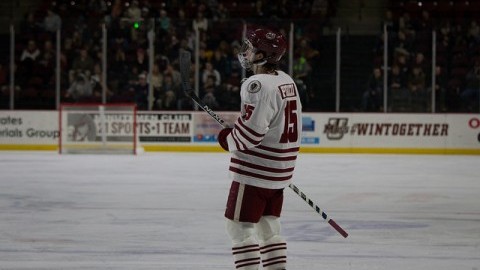 The search for the next head coach of the Massachusetts hockey program is underway, and some candidates have already been interviewed, according to Mike McMahon of College Hockey News.

McMahon reported Monday that UMass conducted interviews last Friday. The candidates who interviewed are unknown, but at least one of them is a current head coach, McMahon tweeted.

In a conference call after former coach John Micheletto was fired, athletic director Ryan Bamford said there was no timetable for hiring a coach.

“We’re going to make the best decision for the long term. And if that takes a little bit longer or a little bit shorter than we anticipate, then that’s ok.”

There’s been no official update from the athletic department regarding any sort of timetable, but the wheels are clearly in motion and recent reports have added a sense of urgency to the hiring process.

After outgunning No. 6 Boston College 5-4 in a semi-final matchup Friday night, No. 9 Northeastern captured its first Hockey East championship since 1988 with a 3-2 win over No. 8 UMass Lowell Saturday night at TD Garden in Boston.

Adam Gaudette scored just one minute, 15 seconds into the championship game to put the Huskies ahead early, and a second period goal from Nolan Stevens allowed Northeastern to enter the third period tied 2-2. Zach Aston-Reese scored the winner at 11:03 of the final period.

Forward Kevin Roy and defenseman Colton Saucerman were both named to the all-tournament team. Ryan Ruck earned both wins in goal for Northeastern, while River Hawks goaltender Kevin Boyle was named the tournament’s most valuable player.

The win capped a red-hot second half of the season for the Huskies, who started the season with one of the worst records in the country. Northeastern limped to a 2-12-3 mark before rebounding with a 20-1-2 stretch to end the year.

The semi-final against the Eagles was a back-and-forth scoring affair. BC scored just 15 seconds into the game to take a 1-0 lead, but the Huskies tied the game later in the period courtesy of Zach Aston-Reese, and Adam Gaudette scored with one second left in the first to give the Northeastern a 2-1 lead heading into the first intermission.

Second period goals from Nolan Stevens and Eric Williams helped stake the Huskies to a 4-3 lead after two, and Lincoln Griffin scored the eventual game winner at nine minutes, 44 seconds of the third period.

The other semi-final game was a classic between the River Hawks and No. 4 Providence College. Lowell prevailed on an A.J. White goal at 12:27 of the third overtime, when a feed from Michael Fallon went off White’s skate and past Friars goaltender Nick Ellis.

The play was ruled no goal on the ice and was reviewed at length, but officials eventually determined there was no distinct kicking motion on White’s part and the goal was counted.

Kevin Boyle made 58 saves in a valiant effort for the losing River Hawks, while Ellis recorded 42 of his own in the win.

Six schools from Hockey East qualified for the field of 16 teams set to begin the NCAA tournament March 25.

The tournament will open with regionals in Worcester, Cincinnati, Albany and St. Paul. The Friars earned a No. 1 seed in the Northeast regional, while other No. 1 teams include top overall seed Quinnipiac, St. Cloud State and North Dakota.

The Frozen Four will be held in Tampa, Florida from April 7-9.

Providence is looking to become the first back-to-back champion since Denver won in 2004 and 2005. Boston College is seeking its sixth national title and hopes to add to its record 24 Frozen Four appearances. BU suffered a heartbreaking defeat in last season’s championship game against the Friars and is also seeking its sixth championship.

A title for the Huskies, River Hawks or Irish would be the first in program history for each team.