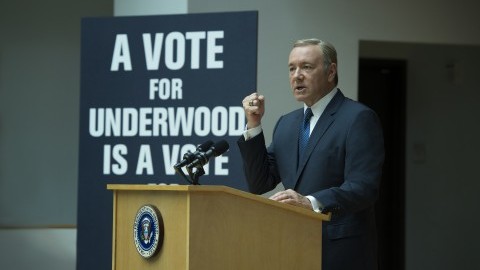 The “Henriad” is the scholarly term for the five plays from “Richard II” to “Richard III,” including both “Henry” plays, written by William Shakespeare. He was using the “War of the Roses” to excite his English audience about their political lineage. We can’t help but wonder why he would tell these stories of corrupt and greedy, if not clever and wise men, to a mass of hardly literate people.

I predict that future scholars will someday refer to “House of Cards” with similar questions about the relationship between masses of people and portrayals of corrupt politicians. Just as Shakespeare offers Jacobean audiences a lens into the imperfect worlds of Richard, Henry and Macbeth, “House of Cards” creator Beau Willimon allows American audiences into an anti-idealistic world of American politics.

Like the masses in Jacobean England, we know our politics are messy. If there is one certainty we can derive from this year’s presidential election, it’s that Americans are fed up with our nefarious political system. I can’t help but watch political speeches and debates and, regardless of the candidate, I know there is a notable amount of dishonesty in what they are saying.

But “House of Cards,” particularly its fourth season, offers Americans like myself an almost Shakespearean tragic satisfaction with our political system. Even through brutal deals behind closed doors and vicious betrayal, I felt apart of the corruption of our diseased system – as if finally I saw the root of the lies, that I know I have been told.

Sometimes Americans want to experience the idealistic hope and pride in our democratic system; other times they want to cringe at the messy corruption that we know exists behind closed doors, but is never visible to us. While “House of Cards” may hyperbolize the extent of the corruption in American politics, it creatively demonstrates the chess-like strategy that must occur in the back chambers of Congress and the White House.

The latest season of “House of Cards” places us at the epicenter of corrupt politics. Themes from earlier seasons – greed, corruption, dishonesty – are all augmented here. Frank Underwood (Kevin Spacey) and his wife Claire (Robin Wright) are more ruthless than ever.

A charming indication of these horrifying politics is the cinematography. It dims all the color, but it’s sleek and compliments the minimalist lighting to give a sanitized, surreal quality that sets a constant mood of cunning, if not criminal, morality. Most Shakespearean about the show, beyond the Jacobean themes, are Spacey’s asides to the audience. His past turn at Richard III is recognizable in his portrayal of the equally immoral President Underwood.

Wright stunningly plays Claire Underwood, capturing her heartlessness on the campaign trail, yet also her personal fragility and humanity. Claire reminds us of Lady Macbeth and Queen Anne in a more complicated and better realized contemporary reimagining. She’s bold, ruthless, loyal yet at times a bit too forgiving of her husband’s sins.

This season further complicates the couple’s confusing but fascinating relationship. Like “Richard III,” it challenges the audience’s understanding of the motives behind couples in power; it makes us reconsider the intersection of love and power, partnership and romance.

Frank Underwood’s manipulation, especially of his wife, is a bit discomforting and hinges on violent. While Claire is strong in herself, and from time to time outwits him, we cannot help but fear that “House of Cards” stinks a little of Shakespeare’s misogyny, where power is a very gendered quality.

I can’t help but consider two other political television series when I watch “House of Cards.” “The West Wing,” largely considered one of the greatest political dramas of all time, elicits the idealistic nature of our democracy; it depicts politicians that are loyal to their ideals, they operate with integrity, and they navigate complex moral dilemmas. “Veep,” the political comedy starring Julia Louis-Dreyfus, shows us the pettiness and goofy missteps of politicians, especially when they misspeak about popular culture or are caught in compromising photos.

These two shows hyperbolize certain aspects of American politics. They bring us to swell with pride at our wise and humble leaders, or to cringe and laugh at politicians when we realize they’re human, too. “House of Cards” delivers the heightening: it forces us to realize the darkness, corruption and cutthroat politics that govern our nation. It’s not pretty. The series makes us realize the facade of campaign speeches and it drives us to imagine the horrors that are taking place right now in our own government.

Yet, in an election year dominated by discussions about the crookedness of our establishment system, perhaps “House of Cards” adds a healthy balance. Shakespeare didn’t incite a revolution in 1592. His plays didn’t lead people to despise their own political system. It allowed them to experience a reality that they knew was occurring but wasn’t accessible to them.

It’s no secret dirty deals are made and politicians are imperfect people. There is something pleasurable in seeing it, even if we have to experience it in the Oval Office of the fictional President Underwood, and have these nasty characters speak to us directly. “House of Cards” doesn’t make us feel warm and cozy about our leaders, but Frank and Claire Underwood offer us honest, if not Shakespearean, American politicians.

Connor Dennin can be reached at [email protected]