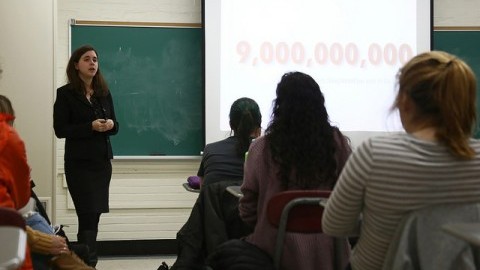 Laura Hancock, a biology masters student and University of Massachusetts campus coordinator for the Humane League, is working to educate the greater UMass community about the impacts of factory farming on animals, people and the environment.

“A lot of people seem to think that vegans and vegetarians are extremists, and I personally am trying to promote compassion,” Hancock said. “I think people are compassionate, and they care about animals and the world around them. I want to help people see how discordant eating animal-based food is with this compassion.”

The Humane League is a 30-campus national organization working to “reduce animal suffering through grassroots education to change eating habits and corporate campaigns to reform farm animal treatment,” according to their website.

Hancock said she has considered herself an animal rights activist since she became a vegetarian at 15 years old, 10 years ago, so when the organization wanted to find a campus coordinator at UMass, Hancock jumped at the opportunity to get involved.

“I love doing what I’m doing.” Hancock said. “I’d be doing these same things even if it weren’t part of an official position.”

Hancock said she works with other campus groups that focus on animal rights, environmental issues or human health. One campaign central to her work at UMass has been to establish Meatless Mondays, an effort cosigned by the UMass Climateers, the Plant-Based Nutrition Club (PNUT) and other campus groups.

Many of Hancock’s efforts overlap with other campus activist organizations. She supports MassPIRG’s efforts to eliminate antibiotic-treated meat and PNUT’s petitions to Dining Services to include more meat-alternatives in their meals.

She also works with a variety of groups to host educational movie screenings and bring animal rights speakers to campus, such as the Humane League’s Director of Campus Outreach Rachel Atcheson, who visited campus last month.

Hancock has been in contact with dozens of student groups in an effort to reach out to the hubs of sympathetic circles.

“(The Humane League) wants to provide an outlet for education on these issues,” Hancock said. “There’s suffering and torture to produce even cheese and eggs. There are horrible inventions and methods being used that I think a lot of people don’t know about.”

Hancock encourages others interested in this cause to get involved with PNUT or any other campus organization working for better treatment of animals.