It is time for our administration to lead with us 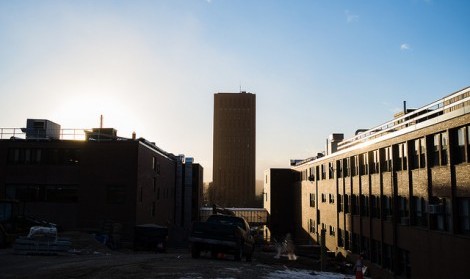 Early this month, for the first time in recorded history, average temperature increases across the northern hemisphere exceeded two degrees Celsius, just months after the global community made a promise to keep warming below the two degrees red line.

There is no longer any doubt about what’s at stake. The link between rapid warming and extreme disaster has become clear and frightening. From Cyclone Winston hitting Fiji last month with the highest winds ever measured in the southern hemisphere, to extended drought in Ethiopia, we continue to witness human suffering and ecological devastation while those who are most responsible propel us even further towards climate destruction.

Students at the University of Massachusetts have chosen to act on the urgency of this crisis, by calling on our institution to remove its holdings in fossil fuel companies, in concert with the global movement for fossil fuel divestment. UMass has already worked to establish itself as a leader for climate action, from supporting one of the best climate science departments in the country, to working toward carbon neutrality on the campuses. In December, our UMass leaders clearly affirmed their intention to part with the dirty and destructive fossil fuel industry by removing all direct investments in coal companies.

Coal divestment was the result of three years of growing demand from UMass students, faculty, staff and alumni, across the UMass campuses. Following the decision, the campaign and community commended the Board of Trustees, but reminded our leaders that coal divestment is not enough.

Yet months later, despite unwavering calls from students and the community for UMass to take the next step for climate justice, the Board of Trustees has refused to make any commitment to full divestment. This continued inaction has led us to ask, if our leaders understand the urgency of this crisis and have demonstrated their ability to take action, then what is holding them back from full divestment?

The answer to this question may be very simple and very disturbing. Recent research into the UMass Foundation, the group that manages the UMass endowment and makes day-to-day investment decisions, has illuminated a troubling picture. Our findings have raised questions that go far beyond investment strategies.

We have found connections between influential members of the UMass Foundation and the fossil fuel industry that are too blatant to sweep under the rug. Take James P. Pappas and Edward D’Alelio, both officers on the Foundation Board of Directors, and both connected to Putnam Investment. Pappas currently serves as vice president of the firm and D’Alelio has previously served as managing director and CIO.

Putnam Investments has over $320 million dollars currently invested in Exxon Mobil – a company under ongoing investigation by the Federal Department of Justice based on the discovery that they knew about the impacts of climate change decades ago, but chose to withhold their findings and conduct widespread public disinformation campaigns.

It seems very likely that Pappas and D’Alelio have vested interests in ensuring that the UMass endowment remains tied up in fossil fuel companies such as Exxon, regardless of their unethical business conduct.

Also highly influential on the Foundation is Charles Pagnam, the executive vice president of the Foundation, and the University’s top fundraiser. Pagnam cultivates some of his fundraising connections in elite circles on Nantucket. One of these connections is Jack Welch, former CEO of General Electric, a company with a record of civil and environmental negligence, including numerous instances of river and soil contamination and hazardous waste mismanagement.

In addition, Welch has become a renowned denier of climate change, calling it a socialist plot and a case of “mass neurosis.” Pagnam’s personal connections to a man who propagates malicious climate denial, and who built his fortune in an industry inextricably linked to coal, oil and gas expansion, call into question his reliability to make an honest decision on divestment. These apparent conflicts of interest cause serious concern that private influences have impeded the ability of our leaders to take action for full fossil fuel divestment.

However bleak this outlook may seem, there is hope. Students are once again presenting our leaders with an opportunity. UMass has a choice: to remain in the pockets of an unethical industry or to act courageously to uphold the University’s mission to “improve the lives of the people of the Commonwealth, the nation and the world.”

This spring, the UMass community will be looking to our leaders, Chairman of the Board of Trustees Victor Woolridge and President Marty Meehan, to prove that our institution is acting on behalf of the public and is not beholden to private interests by divesting immediately from all fossil fuels. Woolridge and Meehan must side with students, the community and climate justice, and take bold leadership on climate change. It is time for our administration to lead with us.