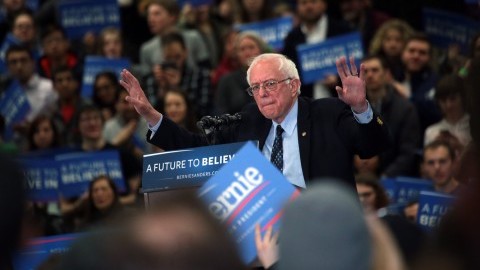 I feel a bit ashamed in contributing yet another column on the current presidential election, which has choked off all other news like Hamlet’s unweeded garden – candidates “rank and gross in nature possess it merely.”

But last Tuesday, on the day of the Massachusetts primary in addition to several others, I recognized what I thought to be a disturbing phenomenon. All across the country United States citizens cast their votes in record numbers for an authoritarian candidate, one who preaches an ideology that is so outdated and wrongheaded that it ought to be an abomination in the 21st century. On my own social media accounts, I saw people who I know and respect post longwinded, poorly reasoned complaints demanding that I vote for this candidate, while insulting those who lack the temerity to join his revolutionary movement. This is a candidate who is willing to circumvent our legislative and judicial branches to get his way and who has capitalized on national anger to advance his radical agenda.

But enough about Bernie Sanders.

What concerns me more than Sanders’ socialist platform is the way so many people on social media discussed our most recent primary. I don’t know how many status updates I saw from people who I had imagined to be apolitical exhorting me to go to the polls, usually implying the necessity of supporting the senator from Vermont. This, I find tremendously annoying. Voting is all well and good, but voting in a presidential primary does not make you some paragon of civic virtue. By posting your filled-in ballot on Facebook or by tagging yourself in a tweet located at your polling place, or any such obnoxiousness, you are simply posturing, declaring yourself the member of a certain tribe and expecting to be hailed wise and righteous for this.

No one has any right to tell anyone else how to vote. In fact, no one has the right to tell anyone to vote at all. These demands of “using your voice” come around most loudly every four years, as though the country only has a single elected representative. In fact, the elections that most directly affect our lives are not presidential primaries, or even necessarily general elections.

Schoolboard members, municipal officials and state senators or representatives have much more power over important community issues, and yet most of us cannot name a single official in or near our home district. If citizens cared a little more about local politics, maybe they would be less apt to seek a messiah on the national level.

Whatever the case may be, you’re not going to get anyone to support your favorite candidate through a Facebook post. It doesn’t make you seem informed and doesn’t make you a warrior for democracy. It’s simply obnoxious.

But it might also be the kick I need to get off of social media, so hey, keep at it.

Lucas Coughlin is a Collegian columnist. He can be reached at [email protected]