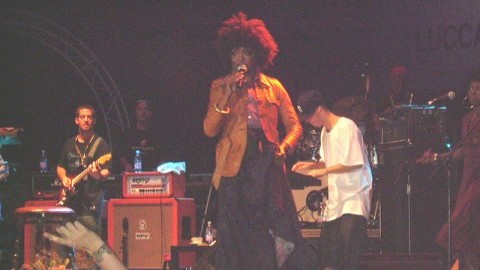 This February marked the 20th anniversary of the Fugees’ best rap album win at the 1996 Grammy Awards with their second and final album, “The Score.” Comprised of Wyclef Jean, Pras Michel and Lauryn Hill, this dynamic trio delivered fans one of the greatest hip hop albums of all times. With their first album “Blunted On Reality” being highly underrated, the Fugees hit the right mark with “The Score” and became one of the most celebrated hip hop groups of the 1990s.

Twenty years later, it should still be revered.

From my first listen, I was amazed at how soulful and genuine the music felt. The Fugees are masters of descriptions, painting scenarios inside the listeners’ heads. A good example of their illustrative lyrics is the hook in “Killing Me Softly,” when Lauryn Hill sings, “Strumming my pain with his fingers/Singing my life with his words/Killing me softly with his song.” Hill takes the listener to a place where she feels pain, both physically and mentally. The song is beautifully crafted by each member of the group with the touch of producer Jerry “Wonder” Duplessis.

While revisiting the Fugees, I was shocked to learn that the members were mostly in their early 20s when “The Score” was released. Lauryn Hill was only 21 years old when she sang the lyrics that continue to echo 20 years later. It’s remarkable that a group as young as the Fugees could make a masterpiece so early on in its lives and careers. The group described its recording process for the record as relaxed and organic. That atmosphere is evident in the music and a reason why I feel the album became a classic.

What’s so special and evident in “The Score” is the versatility of each member, who each have their own flow. The famed Hill, perhaps one of the greatest rappers of all times, is a lyrical genius. She is witty, imaginative, inspirational and versatile while Jean acts as more of the story-telling artist of the group, providing great adlibs throughout the album. Then there’s Michel, who stands out as the grittiest voice of the three and appears last on most tracks.

Gender separates “The Score” from other rap albums of the ‘90s and today. If you look at hip hop from its introduction to the 2010s, you’ll see few co-ed groups and even fewer with a female lead artist. Throughout “The Score,” Hill’s influence is evident on every track she touches, exuding her soulful vibes.

I always found it refreshing to hear Hill’s narrative as a woman in hip hop, absolutely destroying each track she’s present in. The Fugees’ hit record also began the end of commercial success for gangster rap, challenging the perceived ideology that many have attached to hip hop.

Every true hip hop fan should revisit “The Score” for its profound effect on hip hop culture. The record reinvented the genre’s previous gangster rap narrative and is a masterpiece in itself.

Released during a time when the hip hop community was shrouded with negative attitudes, “The Score” is an album that is inspiring, revolutionary and different, producing nothing but positive vibes, while most of the community was stuck on the East vs. West coast rivalry. The record should never be forgotten and should always be praised for what it brought to hip hop culture.

Steven Turner-Parker can be reached at [email protected] also at @Trureligionman on Twitter.