Marco Rubio’s lack of diversity is a problem 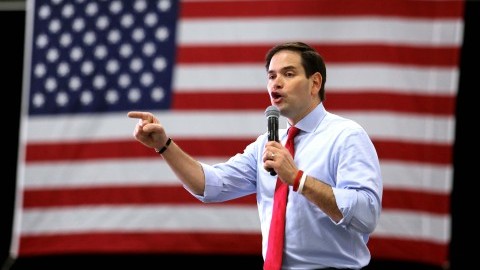 Florida senator and presidential candidate Marco Rubio is not immune to giving ridiculous statements. Just last year, in response to the United States lifting the embargo on Cuba, Rubio dubbed Obama “the single worst negotiator” in his lifetime. Much of his comments should be understood as hyperbole.

In June, Rubio vowed to make sure Congress doesn’t lift the embargo or take any steps whatsoever to renew relations with his home country. He has not made such negative comments about cutting back on trade negotiations with China, nor has he opposed any legislation regarding further foreign business deals with Saudi Arabia, an Islamic country that continues to treat women as inferior citizens and is one of the few that still conduct public executions.

None of this is new, and neither is Rubio’s hypocrisy. But the soon-to-be failed presidential candidate has now said something even more mind boggling.

During the most recent Republican debate hosted by CNN on Feb. 25, Rubio stated, “We are the party of diversity, not the Democrats.”

To be fair, Rubio was referring specifically to the two candidates of Cuban descent (him and Ted Cruz) on stage in addition to one African-American (Ben Carson) candidate. But everyone with a brain knows this assertion on diversity is not true.

The Republican Party has been on the wrong side of many issues for the past 150 years. They came in the form of J. Edgar Hoover, George McCarthy, Jesse Helms and Richard Nixon. They have recently been represented in the form of Donald Trump, George W. Bush and Rick Santelli, whose esteemed CNBC rant launched what we now know to be the Tea Party, a reactionary group, virtually all white, with tints of racism.

This is also nothing new, so it makes me wonder why someone as smart as Rubio would misspeak in such an unfortunate way that is vastly untrue. Then it occurred to me that people like Rubio don’t misspeak – they miss-think. Rubio thinks that just because an African American and two Cubans have participated in presidential debates that it is reflective of the entire party.

Diversity is never limited to race. What is far more important are diversity of viewpoints and ideas. Having someone who made medical breakthroughs, written books about how great America is and is credited with splitting a pair of Siamese twins, does not solve the problem of racial inequality. Having an African-American running for president, before Carson dropped out last week, does not solve the reality that unemployment among blacks is nearly twice that of whites, nor does it solve the problem that African-Americans are six times more likely to be incarcerated than white males.

It would have been a different story if Rubio was only referring to the Republican candidates running for president when making his statement. But of course, he was referring to much more than that. The facts have come to tell a different story. An astounding 89 percent of the Republican party is white. And the truth of the matter is that the Democratic Party has a far richer history when it comes to diversity and helping millions of Americans. Government-funded health insurance, like Medicare, became a reality in 1966 when Lyndon Johnson was president.

Republicans in Congress did not spearhead the legislation. The Social Security Act was passed in 1935 when Franklin D. Roosevelt was president. Rubio has said that upon taking public office that Medicare and Social Security are two programs that his mother depends on in order to survive. If he is a believer is such programs, perhaps he should change parties. But of course he isn’t. Rubio has no problem politicizing the problems of his mother for personal gain and he is not the only Republican candidate to do so.

History matters, and the American people are not as naive as Rubio might think. Thankfully, we will not be experiencing a Rubio presidency any time soon. Moreover, the idea that Rubio could be so aloof as to make a comment such as this and get away with it is a continued testament to the amnesia level of the Republican Party.

I recommend that Rubio go back to discussing what he knows the most about – like the size of Donald Trump’s hands for instance. After all, this is what really matters.