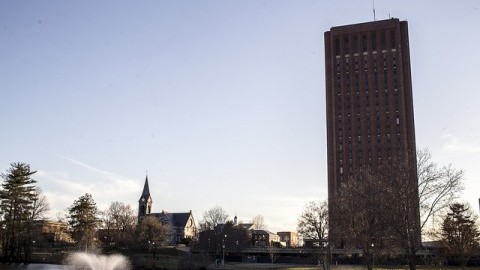 Students representing MassPIRG at the University of Massachusetts, the Student Government Association and the University’s Sustainability Manager said Massachusetts officials should commit to powering the state with 100 percent renewable energy at a press conference on Wednesday at 2:30 p.m.

Sophomore civic engagement and nonprofit management major Julia Seremba announced the release of “We Have the Power,” a new white paper created by the Environment Massachusetts Research and Policy Center and Frontier Group, during the press conference in the Campus Center basement.

“A future powered entirely by clean energy is within our reach,” said Seremba, the coordinator of MassPIRG’s 100 percent Clean Energy Campaign.

Seremba said the paper found that global warming is causing extreme weather events, such as extremely warm winters and Hurricane Sandy, and that the use of fossil fuels has resulted in contamination of air and water in the United States.

She also said fossil fuels in Massachusetts are all imported from other states, thus sending billions of dollars out of the state’s economy.

Ezra Small, the sustainability manager at UMass, said the University has made a commitment to clean energy.

However, Small said that this would depend on the state department of energy and resources’ Solar Renewable Energy Credit II program, which determines which solar energy projects are approved.

SGA Secretary of Sustainability Jennifer Raichel, a senior studying environmental science, said that students on the UMass campus are concerned about these issues, specifically clean energy.

Raichel said that whether buildings on campus are LEED-certified, or resource efficient, is an important question students often have about the campus.

“This white paper will be really encouraging to students on campus,” she said.

Kieran Murphy, a senior who studies resource economics, said that a lack of efficiency is currently causing 60 percent of energy in the United States to be wasted, and that renewable resources such as solar and wind power would save a much greater amount of energy.

Isabella Cobble, a freshman studying engineering, said the state of Massachusetts is currently poised to move in the opposite direction the paper recommended by increasing dependence on fossil fuels.

But Cobble, a campaign member at MassPIRG, said the paper disproved the idea that investing in renewable energy is more expensive than continuing the state’s current energy trends.

“Dirty fuels have no clear economic advantage over clean energy,” she said.

Erik Simon Vuoritie, a freshman studying engineering, agreed with Cobble’s criticism of Massachusetts state officials, referencing state plans to restrict the implementation of solar energy by Massachusetts residents and businesses, and to encourage the development of pipelines in the state.

“One hundred percent renewable is as necessary as it is feasible,” said Vuoritie, a campaign member at MassPIRG.