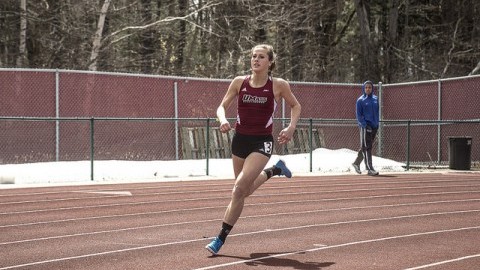 After winning the Atlantic 10 Conference meet, the Massachusetts women’s track and field team reaffirmed that it is one of the best in the region over the weekend at the New England Championship meet in Boston.

The Minutewomen took third place with 71.75 points scored, finishing behind only Northeastern (157) and Rhode Island (82.75) out of 32 teams in competition.

UMass was once again backed by record-setting performances from top athletes. Junior Heather MacLean broke a 28-year-old meet record and improved on her own program record in the 800-meter with a time of two minutes, five seconds. Kelsey Crawford returned from injury with a performance in shot put that improved on her own school record, and freshman Emilie Cowan broke the UMass program record in the 400-meter that had been standing since being set by Lee Ann Ambrose in 1990.

MacLean won the 800-meter and grabbed the New England win in dominant fashion, finishing more than six seconds before the next closest competitor and beating her previous personal record of 2:07.7 that was set last year at the very same meet. Freshman Mary Lavery finished seventh in the same event with a time of 2:13.8.

After beating the program record in the preliminary race the previous day in 54.41 seconds, Cowan improved on that performance and earned silver in the 400-meter with a time of 54.24 seconds. Merrimack’s Carly Muscaro won the race with a time of 52.43.

Cowan would also go on to anchor to the 4×400 meter relay that finished seventh with a time of 3:52.34 and contributed two more points to the third place effort.

Crawford earned a gold medal in the shot put with a 46-foot, 6.75-inch throw that beat her own program record by half an inch. Junior Margaret Riseborough scored in the event as well, finishing in seventh place.

’ Zoe Matherne by less than half a second to win the 1000-meter race with a time of 2:53.32.
Also contributing to the effort was Gabrielle Bennett with a sixth place finish in the high jump and seventh place effort in the 60-meter hurdles. Jada Lofgren-Anderson was another point getter for the Minutewomen, finishing third in the 200-meter at 25.04 seconds.

Additionally, Colleen Sands (9:48.81) and Alexa Livingstone (9:57.87) both scored in the 3000-meter with third and sixth place finishes respectively.

The UMass women’s indoor track and field season concludes next weekend at the Eastern College Athletic Conference Championship in Boston.

The Massachusetts men’s track and field team finished sixth at the New England Championship meet with 31.5 points scored, just half a point behind Vermont at 32 points.

Top scorer on the day was senior Benjamin Groleau who earned 10 points and the New England Championship with his first place finish in the mile with a time of 4:01.87. Junior Cory Thomas scored in the event as well, taking home five points with a time of 4:07.78 that was good enough for a fourth place finish.

Groleau also ran the fourth leg of the Minuteman 4×800-meter relay that took 10th place at the meet with a time of 7:42.95 seconds.

The Minutemen wrap up their winter season at the IC4A’s next weekend in Boston.