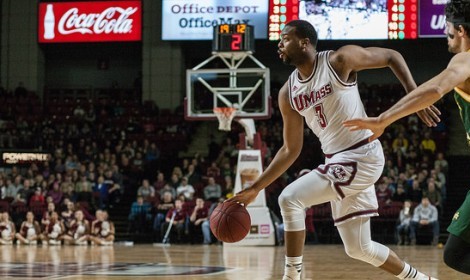 While that didn’t exactly happen – UMass finished 1-3 in its last four games – the Minutemen (13-17, 6-12 Atlantic 10) did pick up a convincing 69-52 win against last-place La Salle to close out their regular season last Saturday.

But now that record is wiped clean as UMass heads to Brooklyn for the A-10 tournament.

“I think it’s time. It’s a long season and our guys have got pretty good energy for this time of year,” Kellogg said. “I think they’ve played good basketball the last month or so or whatever the timeframe is. I think it’s a good time to see where we’re at against some of the better teams in the conference.”

The No. 10 seed Minutemen will take on No. 7 seed Rhode Island (17-14, 9-9 A-10) Thursday night at Barclays Center in the second round of the conference tournament. The two teams split the season regular series with one win each.

UMass took the first game at Mullins Center on Feb. 2 with a 61-56 overtime victory, but the Rams cruised to a 68-50 win in Rhode Island in last Thursday’s rematch.

“Rhode Island to me is a really good team and we’ve had a couple of good battles with them,” Kellogg said. “I think on a neutral court, we always have to play better than we did down at their home arena.”

The Minutemen struggled out of the gate in the loss at the Ryan Center, tallying only 12 points by halftime. UMass sophomore guard Donte Clark attributed these struggles to settling for too many jump shots instead of working the ball into the paint.

Clark said this time, driving into the lane as guards and feeding the ball into the post early will be key.

“It starts by making shots. Last game, we were playing defense, we just couldn’t knock down any shots,” Clark said. “So I think we probably have to get to the hole at the beginning instead of taking some outside shots.”

Kellogg said establishing the movement of the game early will determine UMass’ success against the Rams, who prefer to slow down the pace and rely on playing tough defense. This was something the Minutemen failed to do last Thursday when their first basket of the game came eight minutes into regulation.

“We have to play at a faster pace than we did at their home arena. If we’re making shots, that helps us get into our pace,” Kellogg said. “When we play poorly offensively, that affects what we’re able to do defensively.”

In UMass’ regular season finale win over the Explorers, the top-scoring trio of guards in Trey Davis (27 points), Clark (17) and Jabarie Hinds (13) paved the way for the Minutemen once again. Kellogg said UMass will need all three at the top of their game to be successful in Brooklyn.

“It probably starts with Trey, Donte and Jabarie and I think the guys feed off that energy,” Kellogg said.

Kellogg added that UMass boasts the best depth it has had all season with Zach Coleman and Seth Berger back from their earlier respective injuries, Antwan Space feeling more comfortable in the Minutemen’s system and Rashaan Holloway providing quality minutes in each of the last three games.

Kellogg believes Holloway, a freshman center can bring a unique post presence this upcoming tournament as well as the next few seasons.

“If you can have a big guy like Rashaan that you can throw the ball to and get baskets, I think that can differentiate you from other teams in the league,” Kellogg said. “I think it’s good motivation for Rashaan going into this tournament and also in the offseason to say, ‘Alright now I know the jumps I need to make that the coaches and staff have talked about all season.’”

Clark added: “We know he’s so big, nobody could really stop him so he just has to know it himself. We already know.”

UMass and URI tip off at 6:30 p.m. Thursday night for a game that will be televised on NBC Sports Network. The winner will move on to face No. 2 seed Virginia Commonwealth in Friday’s quarterfinals.