Polyphia’s ‘Renaissance:’ A postmodern triumph with the devil in the details 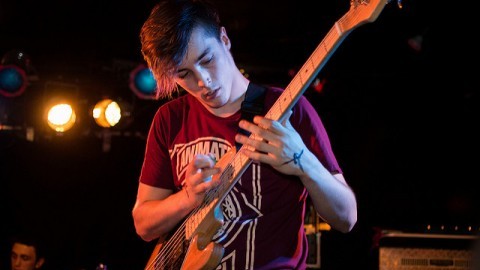 The guitar wizards of progressive-rock group Polyphia blurred the lines between high art and pop culture by blending gorgeous orchestrations with the band’s technical brilliance in their second studio album, “Renaissance.”

“Renaissance” is a rare example of an album without a blemish. Every song fills your head with a lush wall of sound and tells a story that is spoken without words. It pulls no instrumental punches and never gets tired. As a result, a myriad of intense and memorable moments are scattered throughout the album and highlight the best of what Polyphia has to offer. Parts of every song have something unique, so there is no feeling of repetition when listening to the record. Elements including a harp playing the opening notes of “Paradise,” a swooping bass line that erupts in “Storm,” or the signature buzz of guitarist Tim Henson’s floating tremolo make for an album studded with great moments that constantly excite the listener.

The two-guitar lineup made up of Henson and Scott LePage makes for a tremendously diverse exchange of some really great guitar moments. Soul-spilling solos, explosive walls of sound and loads of tones and distortions at their disposal all contribute in making songs and lines that are larger than life. Songs like “Euphoria,” “Paradise” and “Florence” have guitar moments that fill the high register with bright, complex melodies that sound the way oil looks on canvas.

As much as the guitar lines bring to “Renaissance,” bassist Clay Gober adds tight, technical rhythms and mind-blowing standalone moments where the low register dominates songs like “Nightmare,” “Crush” and “Storm.” The “not a slap, not a pick” type of style Gober plays with gives him a versatility that allows him to hold the incredibly precise rhythm of the band together and produce some funky, outspoken bass lines on the turn of a dime. Gober really shines in songs like “Amour” and “Crush,” in which his contributions are arguably the best moments of the tracks.

The inspiration behind Polyphia’s songs comes from a surprising genre – pop. According to a recent Q&A that the band held on Reddit, Top 40 artists like The Game and Ariana Grande were among the strongest sources of inspiration for a majority of the album, and the influence is apparent on songs like “Light” and “Amour.” The mashup Polyphia made between “Nightmare” and The Weeknd’s “The Hills” is utterly epic and perfectly put together, and puts the hipster’s distaste of pop music to shame.

As well-rounded and wholly enjoyable listening to “Renaissance” is, there were a few moments were I was left wanting more. A six-note moving bass line in “Storm” gave me a stronger post-hardcore feeling than many of the most popular bands do in an entire song, and the way it never got a response left me feeling like more could have been done. Additionally, the introduction to “Light” felt a little overwhelming, and the Interlude, “Symmetry,” didn’t feel like it was completely explored.

“Renaissance” was the best first listen of an album I’ve ever had. It’s an extraordinary record, in that the listener learns something new with every experience. The tremendous depth of each song makes for an album with serious replay-ability that continues to feel fresh and exciting after three weeks of extensive listening.

Fitzgerald Pucci can be reached at [email protected]