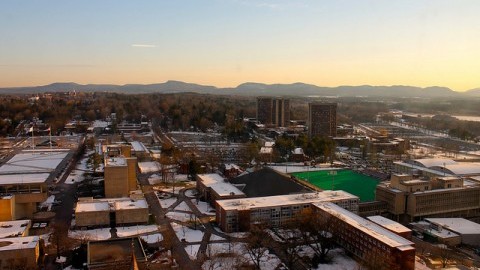 An anti-Semitic and white supremacist flyer was distributed to multiple University of Massachusetts fax machines and printers Thursday morning.

“As a campus community, we condemn this cowardly and hateful act. This despicable incident reminds us that we must not be complacent as we continue to strive for a society that embraces diversity, inclusion and equity – a society where everyone feels safe and welcome,” Subbaswamy said in the email.

The message printed on the flyer called for white men to join “the struggle for global white supremacy” by joining a particular anti-Semitic group.

At least one copy of the flyer was discovered in the printer of the Integrative Learning Center’s Ziff Gallery at 8:05 on Thursday morning, according to a Post-It note attached to the flyer. The flyer was left face down on the receptionist’s desk with the note attached.

Several other printers and fax machines around campus also received the flyer according to the email, which said the flyer appears to have been transmitted from an off-campus location.

The flyer also featured two swastikas. The group listed on the flyer has been identified as a hate group by the Southern Poverty Law Center, according to Subbaswamy’s email.

The incident is under active investigation by the UMass Police Department and campus Information Technology officials, according to the email. It was described as an information security incident.

Kathy Forde, chair of the journalism department, said the department was “concerned and troubled” when it found the flyer this morning, and that she hopes the investigation will discover where the speech came from.

“Hate speech has no place on a college campus,” she said. “As journalists we condemn hate speech and racism and anti-Semitism.”

In 2014, the organization listed on the flyer announced plans to launch an anti-Jewish campaign of flyer distribution in Southern New Hampshire near Jewish institutions, memorials and schools, according to the Southern Poverty Law Center.

The incident comes less than two months after multiple incidents of reported swastikas being found on campus.

A previous incident involving anti-Semitic vandalism was initially reported on Feb. 2 and reported to the UMass police for investigation shortly after.

The incident was reported the same day that UMass student Jeremy Tibbetts published a column in the Daily Collegian responding to photos that circulated in December on a UMass Snapchat story featuring three students playing “Nazis vs. Jews” beer pong.”

Three more swastikas were found later in February. One was found scratched in a metal bathroom door in Hasbrouck 219, another was found made out of snow on the roof of a parked car in Orchard Hill Residential area and another incident was reported on Feb. 16.

The email urges any member of the campus community who receives the flyer to notify IT immediately through email, and to include the name of the office and building the flyer was sent to, the type of device affect, the IP address of the device and the telephone number of an office contact person.

The Collegian will provide updates as they become available.

Patricia LeBoeuf can be reached at [email protected] and followed on Twitter @leboeuf_trisha. LeBoeuf reported this incident to the journalism department Thursday morning.