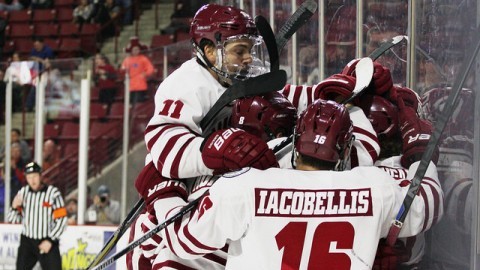 ESPN anchor John Buccigross tweeted Tuesday afternoon that UMass Athletic Director Ryan Bamford had “worked out” a five-year deal with Carvel according to sources, and the University could officially announce the hiring as quickly as today.

Bamford then tweeted out the news confirming the hiring of Carvel at 3:07 p.m.

“This is an exciting day for our hockey program as we welcome Greg and his family to the University of Massachusetts.” Bamford said in the press release. “Greg’s extensive pro and college hockey experience, including considerable success as a player and coach, will serve him well as the leader of our program for years to come.

“I look forward to working closely with Greg and his staff to place the Commonwealth’s Flagship hockey program in a position of sustained success in Hockey East and beyond,” Bamford added.

“I am very excited about the opportunity that exists for the University of Massachusetts hockey program and the potential for success here,” Carvel said in the press release. “I was very impressed with the vision and energy of Director of Athletics Ryan Bamford and his desire to succeed in Hockey East. I feel that I bring a wide range of coaching experience and proven success at the collegiate, professional and international levels.”

Carvel will be introduced and address the media on Thursday in a mid-morning press conference in Amherst followed up by a later conference that afternoon in Boston.

Carvel, 45, will be the 13th head coach in program history, replacing John Micheletto after Micheletto was fired on March 6. Carvel has led the Saints since the 2012-13 season, compiling a record of 72-63-15, including a 20-win season in 2014-15 in which he won the Tim Taylor award as ECAC Coach of the Year. SLU earned a second place finish in the conference that year despite being picked to finish 11th in the preseason. That same season, he was named an assistant coach for the 2015 U.S. Men’s National Team.

Carvel also brings NHL coaching experience with him to Amherst. In 1999, he joined the Anaheim Mighty Ducks as scouting coordinator, and later became an assistant coach for the Ottawa Senators in 2004 up until his departure in 2011. Both teams made appearances in the Stanley Cup during his time with these teams.

A graduate of St. Lawrence, Carvel has ties to the UMass community, earning a master’s degree in sports management from the University in 1996. During his time with the Saints as a player, he scored 37 goals and recorded 87 assists under the tutelage of Joe Marsh.

“As an alumnus of St. Lawrence University, I leave with a heavy heart and great appreciation for what the University has done for me, in particular, Joe Marsh,” Carvel said in the release. “The University of Massachusetts will provide me with the next opportunity to help rebuild a hockey program that has great potential for success. Having earned my master’s degree from UMass, I am well aware of the prestige of the school and its desire to have a championship-caliber hockey program at a Top 30 Public Research University.”

Carvel wasn’t the first name to be tied to the position. Buccigross tweeted Sunday that Harvard associate head coach Paul Pearl and Merrimack head coach Mark Dennehy were the “front runners” for the position before