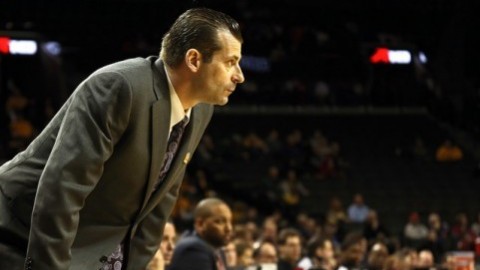 It’s been an underachieving season for coach Derek Kellogg and the Massachusetts men’s basketball team.

Just two years removed from an at-large NCAA tournament bid – the program’s first appearance since the 1997-98 season – UMass (13-17, 6-12 Atlantic 10) is in danger of recording its first losing season since 2009-10, barring a surprise run at the Atlantic 10 tournament in Brooklyn.

“There’s no reason to believe that. We are moving forward with Derek. Derek is our head coach. We’ve had a season that I think we are going to learn a lot from and Derek and I have talked. Derek has done some good work here,” Bamford said.

“While this season I don’t know if it met everyone’s expectations, we are bringing in a good recruiting class moving forward, we are certainly hoping to make a nice run this year. We are always looking to win the A-10 championship, so this week is important to us. I’m not going to look ahead to next year until we get done with this year.”

The Minutemen clinched a No. 10 seed in this week’s A-10 tournament and avoided playing in Wednesday’s opening round after beating La Salle 69-52 Saturday night alongside St. Bonaventure’s win over Saint Louis.

UMass opens the conference tournament against No. 7 seed Rhode Island Thursday night at 6:30 p.m. The teams split the season series 1-1, with the home team winning each matchup.

Despite a sub-.500 record looming for the Minutemen, Bamford noted UMass’ recruiting class as one of the reasons he believes Kellogg is the right man for the job.

With the signing of ESPN top-100 recruit DeJon Jarreau (ranked the 61st best prospect in 2016) and four-star recruit Chris Baldwin, the Minutemen have the 25th best upcoming recruiting class according to the worldwide leader, while 247sports.com lists UMass with the 20th best class for the 2016-17 season.

“I think Derek and his staff has proven that we can recruit high-level talent to this campus and now we have to develop them,” Bamford said. “We’ve got aspirations in men’s basketball to be nationally competitive as well. I think that Derek is the right person to do that for us. We are going to absolutely move forward with Derek as our head coach.”

In an interview with the Massachusetts Daily Collegian in February, Bamford said he evaluates different coaches and teams by more than just win-loss records. Instead, he looks at the entire body of work, using the phrase “life cycle” when referring to evaluation methods of different teams.

“I don’t write the story halfway through the year, or three-quarters throughout the year. I like to look at the whole body of work and evaluate. And honestly for where we are in the life cycles of our programs – I talk about this with our coaches – some programs are in a different life cycle than others,” Bamford said in an interview on Feb. 2.

He added: “Whether that be a new coach or a coach has been here for a period of time or what our talent is. We need to evaluate programs in different ways based on their life cycle.”