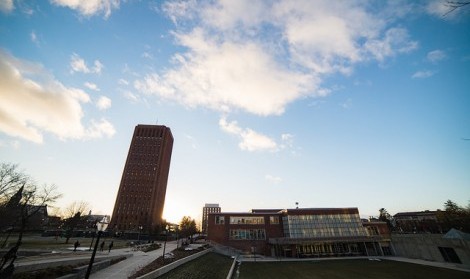 This incident occurred less than a week after an anti-Semitic and white supremacist flyer was similarly distributed on Thursday. MassLive reported that UMass was one of several universities across the country, including Smith College, to receive the flyer Thursday.

According to an email sent by Chancellor Kumble Subbaswamy to the campus community Thursday regarding last week’s event, the UMass Police Department was conducting an investigation. The email described the incident as an “information security incident,” and said the flyers were distributed to campus printers and faxes via an off-campus location.

Patricia Murphy, the news editorial director for WMUA, found Sunday’s flyer in the WMUA office, and said it was transmitted and printed at 12:10 p.m. WMUA reported the flyer to the information technology department, which responded to the report and asked for more information regarding the incident. A WMUA printer received Thursday’s flyer as well.

Sunday’s flyer was also received by the Thoreau Residential Service desk which services the Thoreau, Kennedy, Coolidge, Melville, James and Emerson residence halls in the Southwest Residential Area. It was discovered Monday morning that the flyer was also sent to the journalism department’s “Hub,” located on the fourth floor of the Integrated Learning Center.

“It’s definitely disheartening to see something like this, that seems to be hateful to students at this school that’s a liberal school with liberal leanings and students of different identities,” Murphy said. She also noted her concern that the source of the hateful flyer may be a copycat of last week’s sender.

Sunday’s flyer was attributed to an online trolling group, but it’s unclear whether the group has claimed responsibility for it.

The Washington Times reported that a hacker named Andrew Auernheimer, who goes by the alias “weev,” claimed responsibility for Thursday’s anti-Semitic flyers. He said that he found roughly 29,000 “vulnerable” printers via an open port and transmitted the flyer “within minutes.”

Sunday evening, Allison Koss, IT’s communications coordinator, sent an email to the UMass community saying, that “in response to recent security threats, we have tightened controls at the campus network border. If this change has interfered with device functionality in your area, please let us know so we can make any needed adjustments.”

It is unclear if this message was sent in regards to Sunday’s flyer. IT was not immediately available for comment.

That email is the second sent by IT regarding security problems Sunday.

In another message to the campus community Sunday morning, Matthew Dalton, chief information security officer for IT, said that “Last night a fake message (phish) was sent to many people that purported to be from Julie Buehler,” the vice chancellor for information services and strategy and chief information officer. The email further instructed students who had received the phishing message to change their IT account password.

UMPD referred the Daily Collegian’s questions to the University’s News and Media Relations Office, which did not return calls for comment Sunday night. On Monday, UMass spokesperson Ed Blaguszewski said in an email to the Collegian that University officials will request federal agents to help identify the hackers.

“Following a second incident in which a hate-filled flyer was sent on Sunday to University offices via networked faxes and printers, UMass Amherst officials plan to request that federal agents act to help identify and prosecute the hackers,” Blaguszewski said in the email. “The University condemns such cowardly and hateful acts. Information Technology officials at UMass say they have now fully blocked the specific printing method that was exploited to distribute the fliers from outside the campus computing network.”

The named locations flyers were sent to Sunday is not an exhaustive list.