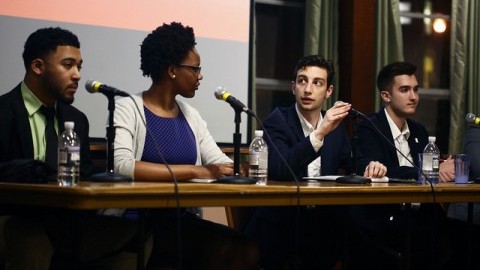 Candidates for executive positions in the Student Government Association debated Thursday evening in Student Union’s Cape Cod Lounge. The debate, which focused primarily on diversity and inclusivity, lasted an hour and a half and was moderated by editors from the Daily Collegian.

Featuring the presidential tickets of Khalif Nunnally-Rivera and Maija Hall and Anthony Vitale and Nicholas Rampone, as well as Student Trustee candidate Joshua Odam, the conversation centered primarily on candidate’s planned efforts for their administrations.

Dominated by social justice issues, dealing with administration, student involvement and barriers to higher education, the debate was largely focused on candidates past efforts as members of both the SGA and the greater campus community.

Hoping to make the University of Massachusetts a more open space for marginalized communities, they hope to foster the implementation of policies that increase recruitment of minority populations as well as freshman general education courses that teach about nuanced social justice issues.

Hall framed the group’s focus on issues of diversity by noting that they have a high stake in issues of campus diversity, and are particularly well equipped to handle issues of such sensitivity and significance.

Vitale and Rampone offered a wider platform that focused on a universal approach for campus improvement, the likes of which centered on an active movement to involve the campus community in the actions of the SGA. The Vitale/Rampone ticket offered a number of solutions that included the conversion of the currently vacant Hatch into a space which Rampone described as being akin to the renovated Van Meter Residence Hall basement.

Nunnally-Rivera was critical of the plan, citing recent university cuts and the cost of the proposed project as mitigating factors to implementation.

Vitale responded to concerns, saying that renovations were “not just an expense, but an investment.”

Candidates answered questions from moderators for the first 45 minutes of the debate, and then responded to live questions from the audience. Differences between the Nunnally-Rivera and Vitale campaigns became more apparent during the audience portion of the event, when Vitale was asked several pointed inquiries regarding his ticket’s stance on diversity and inclusion.

Audience members pressed Vitale for specifics near the end of the debate, and asked him to identify which student groups he felt were underrepresented and how he might look to better represent them. Vitale responded by saying there was a “laundry list” of student groups and identifications that needed increased representation.

One moment late in the debate crystallized Vitale’s disconnect with the audience where, after speaking over a series of applause for Nunnally-Rivera, Vitale was met with another round of applause, drowning out his response to an audience member’s question.

Nunnally-Rivera’s campaign was swift in their answer, expressing their concern for students of color as well as LGBTQ+ student’s representation both in student government as well as the greater campus.

All candidates also expressed concerns about gender-based sexual violence on campus and pledged to work toward creating a safer community.

Odam, who is currently running unchallenged, commanded the room. Speaking from a point of authority within Student Bridges, Odam answered questions regarding the University’s issues with diversity with specific, state wide plans to counter underrepresentation in higher education. Calling for what he termed a “Statewide Students Association,” Odam expressed his desire to implement programs like Student Bridges at all UMass system campuses.

Despite their differences, all candidates shared similar views as to the current state of the SGA, seeing progress as being made but not at the rate that it needs to be. Both Nunnally-Rivera and Vitale hope to implement policies that increase student’s civic engagement with the SGA by expanding the association to be more inclusive of all students.

The SGA executive elections will be held March 20 to the 23 and will be live on Campus Pulse.

Daniel Mahoney can be reached at [email protected]