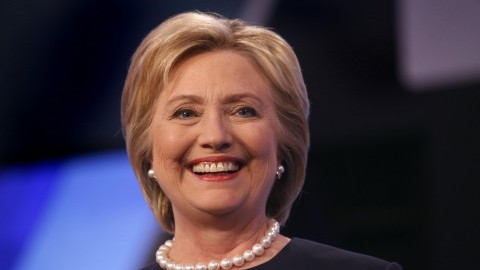 Ten months ago, few would have predicted that Bernie Sanders, the independent socialist senator from Vermont, would present a serious challenge to former Secretary of State Hillary Clinton’s march to the Democratic nomination for president. But almost two months into primary voting, Clinton is just hanging on to her lead, and it’s largely thanks to overwhelming support among black voters.

Clinton has opened up a huge delegate lead over Sanders after sweeping the South, where she won the black vote by historic margins. Her margins among African Americans in states like Illinois, Missouri and Massachusetts have prevented Sanders from claiming victories in major states. But one question lingers – why does she garner huge support among black voters?

One answer? They know her.

Clinton is inherently linked to the legacies of former President Bill Clinton, her husband, and President Barack Obama, whom she served as Secretary of State.

Both Bill Clinton and Obama come from humble beginnings, both pushed through sweeping free trade deals and both were known as the “first black president.” But they both play starkly different roles in black communities. The warm feelings of the wonder years for these men are being dispelled by a frigid and stark reality.

When elected president, Obama’s victory marked a huge milestone for America, yet African Americans continued to suffer systemic prejudice. Obama’s policies have failed to reach blacks to the same extent as the general population.

That is not to say Obama has been harmful to African Americans. The Affordable Care Act provided health insurance access to millions of African Americans, and the Obama administration has made some progress on criminal justice reform. Obama’s presence in the Oval Office arguably has opened up the most serious discussion about race that this country has ever had and has exposed the public to the injustices blacks still face every day.

Yet Bill Clinton’s policies should cancel out any goodwill generated by Hillary Clinton’s position in the Obama administration.

After Clinton signed the “Violent Crime Control and Law Enforcement Act,” mass incarcerations affected the African American community more than any other. Clinton’s support of Republican “welfare reform” disproportionately cut essential government benefits to African American households. And both Clintons have used coded language to describe African Americans, like Hillary Clinton’s description of a black person as a “superpredator.”

But Bill Clinton still occupies a unique spot in Black America’s conscience, in part due to his upbringing in the poor rural South, but also because of his mastery (or manipulation) of black culture.

There isn’t much to say about Sanders’s history with African Americans. To the African American community, Sanders is a relative unknown despite his lifelong support of civil rights and his strong and consistent record on racial justice.

Regardless, Sanders and Clinton have similar racial justice platforms and have garnered endorsements from prominent black leaders, although Clinton has more endorsements.

If black voters were basing their voting decisions solely on the candidates’ policy proposals, the African American electorate likely would be split more evenly between Sanders and Clinton. But a recent Gallup poll shows Clinton’s favorability rating among black voters at 82 percent, while Sanders’s is only 53 percent.

But 31 percent of African Americans say they don’t know enough about Sanders to rate him, which shows that Hillary Clinton’s support among black voters largely comes from her greater visibility over the past two decades and her close connections to the Bill Clinton and Barack Obama presidencies.