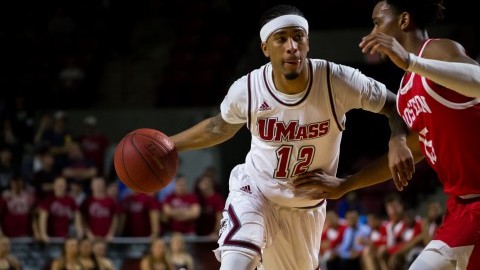 After the Massachusetts men’s basketball team scored only 12 points in the first half Thursday night against Rhode Island, Trey Davis wasn’t going to allow a repeat performance in his final game at Mullins Center.

However, as good of a first half as it was for Davis, he then passed the torch off to fellow senior Jabarie Hinds, who scored 12 of his 13 points in the second half after shooting 0-for-5 from the field in the first half.

“I’m happy for our seniors and for the fans that came out tonight. I thought our guys played a good game,” UMass coach Derek Kellogg said after the win.

“It was nice to see Trey lead us in the first half and Jabarie carry us in the second half.”

“When we’ve won and played well, those guys have gone back and forth. And then you throw Donte in the mix, who had 17, and that’s a pretty good three-man group that can score the basketball,” Kellogg said.

“Yeah it was pretty good,” Davis said of his performance on Senior Night. “I can’t complain, I had some good numbers out there and I played well and played hard and that’s all I can really ask for.”

After breaking a Mullins Center scoring record back on Dec. 16 with 40 points in a 103-95 overtime win against New Orleans, Davis joked after the game about going for the record after his 20-point first half.

Although it wasn’t a record-breaking performance for Davis, he did set a new career high – and game-high – with 12 rebounds.

While Hinds jumped out to quick eight points in the first six minutes of the second half, his best play of the night didn’t come on a basket of his own. It was on making an extra pass.

With 13:07 remaining in the game, Hinds had an open look for 3-pointer with an Explorer (8-21, 4-14 A-10) defender closing out on him on the wing. Rather than taking the contested shot, Hinds dished it to a wide-open Seth Berger in the corner, whose 3-pointer gave the Minutemen a 14-point lead.

In addition to Davis and Hinds’ performances, midseason walk-on Chris Lydon made his first career start, finishing the game with two minutes played.

Prior to the game, Kellogg wasn’t sure whether or not to start Lydon with Saturday’s game having serious implications on UMass’ standings in the A-10 seeding.

“On my ride over to shootaround I was texting some of the coaches saying, ‘Hey, you know, what do you guys think of me starting Chris because I’m probably going to do it.’ They chimed in and I listened to one of them, didn’t listen to one and went with what I was doing,” Kellogg said.

“I had a couple of plays in the bag for him and the whistle blew too quick. It was nice to see him start and he’s been a good addition halfway through the season. Call it superstitious, customary, whatever, I thought you got to start your seniors.”