Two years and 200 cops later: How the University has adopted its policies for Blarney weekend 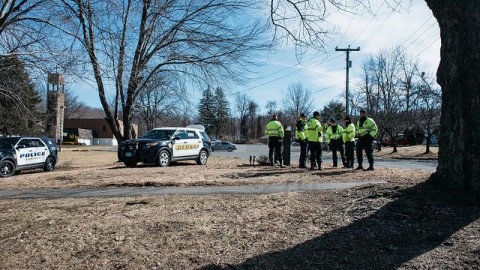 Police were out in full force to provide security for this year’s “Blarney Blowout” celebration. With only seven arrests and ten court summonses made, the tight grip that the University of Massachusetts and hundreds of police officers from varying forces had on the drunken students appears to be a huge success, considering the 55 arrested during the event in 2014.

Is the lack of students in jail and possibly facing expulsion the result of the stepped up approach of the campus and police, or was the day a success because police didn’t overreact? And were students safer, wandering around campus and town from party to party, than they would have been, penned up in a known location?

These are important questions to ask when an institution of higher learning decides it is necessary to install a police state for a day in order to protect the town from the students and the students from themselves. College has practically always been the place where parties get out of hand and kids blow off a bit of steam. It’s only recently that drunk college students have been treated like a true security threat and that does not seem to make any sense.

During the 2014 Blarney Blowout, things got so out of hand that even Time magazine wrote an article about the event. After 2014, it was even seen as necessary for the former Boston police commissioner, Edward Davis, to write a report analyzing Blarney.

The report concluded that 2014 was such a huge problem as a result of poor police coordination, the event itself and gatherings of students of such a nature, and some preemptive force used by the police, such as firing tear gas at the partiers. Many of the people arrested were not UMass students. This has resulted in the bans on visitors and parking during the Blarney weekend.

There are some problems here.

The tear gas was a little bit more than a preemptive strike. I’ll never forget the video I saw of a young man standing as an officer walked over to him from afar and sprayed him point-blank in the face with pepper spray. The student was drunk, sure, and he was yelling some profanities, but he wasn’t doing anything that warranted being pepper sprayed from six inches away. That can seriously injure someone.

You also have to wonder about the bans on visitors and parking over the weekend. When have people ever really been deterred from partying as they please because of a few new rules? At least when the dorms were dangerously overcrowded and the parking lots were full, visitors weren’t being forced to choose between driving home drunk or not attending the Blarney weekend at all. With a floor to crash on and maybe a blanket from a friend, any buddy of a college student is endangering far fewer people that getting behind the wheel while seeing double. Banning official visitors probably deterred a few from showing up, but friends are still going to find a way to get drunk with their friends.

In previous Blarney Blowouts, the students would certainly make a mess at the apartment complexes and it is easy to imagine this as a hassle to residents, and even those living within a mile who can usually here the dull roar like thunder in the distance. On the other hand, though, with students inevitably partying, isn’t it better for them to be in one place so that they can be monitored properly?

It’s not like there weren’t drunk young people stumbling all over town on Saturday. It happens every year and it happens every time a Massachusetts sports team does anything. Last time the Red Sox won, a panel on my car got smashed in by a stray beer can.

Instead of being in one semi-dangerous muddy pit that the police could easily observe from all angles, partiers were scattered at various parties all across town, which probably disturbed the peace for just as many people.

Half of the reason students became so unruly and violent during 2014 was because they were choking and crying from the tear gas fired at them even when they were agreeing to disperse. There’s no better way to create violence than by starting it.

The main problem in all of the Blarney Blowout events, though, is the drinking culture that invades the minds of students as they enter school. Drinking isn’t a bad thing, necessarily, but excessive drinking is dangerous in so many ways there isn’t even a point in describing them. We all know. I got pancreatitis from a night of over-drinking when I was 19, so I know what a few too many shots can do to a body.

Davis’ report highlights this problem of drinking culture for students, and the report is accurate. While this year’s Blarney Blowout paled in comparison to that of previous years, as far as arrests go, not much changed for the students. They were still all over town, wasted. The campus and police used what we can only assume must have been large amounts of resources to to provide a secure campus environment this weekend. They didn’t do anything to protect the students, though; they just didn’t assault them.