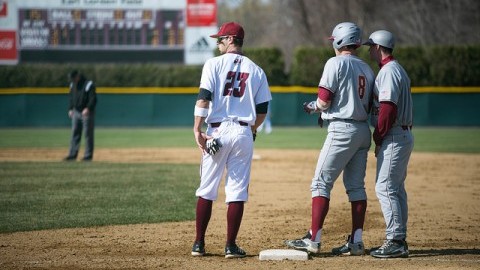 Home has not been the nicest of places to the Massachusetts baseball team so far this season.

The Minutemen allowed five runs in the first two innings against Boston College Wednesday at Earl Lorden Field, failing to mount a comeback in an 11-5 loss to the Eagles, putting a squash on their two-game winning streak.

Redshirt sophomore pitcher Ryan Venditti struggled in his second start of the season for UMass (5-11). Venditti allowed five runs on six hits and threw three wild pitches in his 1.1 innings of work, as the Minutemen fell to 0-2 on at home.

The UMass bats did not go quietly in the following innings, scoring three runs in the next two frames to get to within two runs of BC (14-9). That’s as close as they would come, however.

“We definitely didn’t quit, but I felt in the latter half of the ballgame we left some at-bats out there,” Minutemen coach Mike Stone said. “Early on, I felt good about our effort – the fact that we didn’t quit and kept fighting. When you get one or get two (runs offensively), you’ve got to go out and put zeroes up, and we didn’t do that. They continued to put the pressure on us and extend the score, and we couldn’t keep pace.”

“It’s tough any time you get down like that, 3-0 in the first inning, to stay up, have energy and really stay focused,” catcher John Jennings said. “I think we did a pretty good job – getting three in the first couple innings to make it 5-3. We just couldn’t sustain it.”

The Minutemen had runners on base in the fifth, sixth and seventh innings, but came away empty handed as they failed to get multiple runs across in those innings.

“That’s kind of been one of our issues all year, RBI hitting,” Stone said. “We haven’t cashed in enough. Even yesterday (3-2 victory over Northeastern), we left guys in scoring position and didn’t come through enough. As a hitter, that’s when you would want to hit most I would think. Anybody who’s played the game loves to hit when there’s people in scoring position. We just haven’t done that well enough yet.”

Jennings’ bat was one that continued to hit the ball well. The senior captain cut the deficit to 6-4 in the fifth with a double that scored Mike Hart. Jennings had two hits on the day with two runs batted in.

“He looks very confident, real balanced,” Stone said of Jennings. “He looks like he’s seeing the ball well and using his hands. He just really looks locked in and he’s doing a good job.”

“The ball looks like a beach ball to me right now,” Jennings added. “I’m seeing the ball well and I’m putting good swings on it.”

The bullpen was forced to expend four arms over the course of 7.2 innings with Venditti’s inability to get through the second inning on the mound. Mike Geannelis carried the bulk of the load, pitching 2.2 innings while striking out six in his first appearance of the season after missing the first 15 games. The junior right hander, who figured to be a key piece in the Minutemen rotation and at the plate, was ineligible due to a team related infraction, according to Stone.

Cooper Mrowka kicked off the scoring for UMass with an RBI double into the gap in left center to plate Hunter Carey in the second inning. Carey scored Dylan Morris on a fielder’s choice in the seventh inning. Morris (two hits) continued his torrid pace (.364 batting average) with a solo home run in the third inning. Brett Evangelista had the lone other hit for the Minutemen, who tallied just eight in the contest compared to the Eagles’ 16.

UMass is back in action Saturday at 1 p.m. as they host Rhode Island (9-12) at Lorden Field for the first half of a home-and-home series.

Kyle DaLuz can be reached [email protected] and followed on Twitter @Kyle_DaLuz.